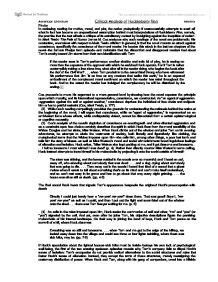 American Literature Critical Analysis of Huckleberry Finn Marina Pindar In outlawing reading for motive, moral, and plot, the notice proleptically--if unsuccessfully--attempts to ward off what in fact has become an unquestioned assumption behind most interpretations of Huckleberry Finn, namely, the premise that the text affords a critique of its extraliterary context by inveighing against the inequities of racism. In Mark Twain: The Fate of Humor James M. Cox analyzes why such readings of the novel are problematic. His contention, anomalous with respect to Mark Twain criticism in general, is that the novel mounts an attack against conscience, specifically the conscience of the moral reader. He locates this attack in the last ten chapters of the novel--the famous Phelps farm episode--and maintains that the discomfort and disapproval readers feel about Tom's cruelty toward Jim stems from their own identification with Tom: If the reader sees in Tom's performance a rather shabby and safe bit of play, he is seeing no more than the exposure of the approval with which he watched Huck operate. For if Tom is rather contemptibly setting a free slave free, what after all is the reader doing, who begins the book after the fact of the Civil War? . . . when Tom proclaims to the assembled throng who have witnessed his performance that Jim `is as free as any creature that walks this earth,' he is an exposed embodiment of the complacent moral sentiment on which the reader has relied throughout the book. And to the extent the reader has indulged the complacency he will be disturbed by the ending.[2] Cox proceeds to move his argument to a more general level by showing how the novel exposes the principle upon which morality, and its internalized representative, conscience, are constructed. As "an agent of aggression--aggression against the self or against another," conscience deprives the individual of free choice and subjects him or her to painful restraint (Cox, Mark Twain, p. ...read more.

But to speak of the novel in these terms is to beg the point because, as the opening notice suggests, the novel departs from the assumption that moral judgments are indistinguishable from the process by which we make sense. In what follows I will argue that the novel neither celebrates nor laments the inevitability of conscience but rather explores the interplay between morality and sense making, conscience and cognition. It does this by revealing how the (moral) process of identification--with either the fictions imposed by others or with fictions of one's own creation--provides the foundation for nothing less than human identity and cognition.[5] {12} The famous crisis-of-conscience scene paradigmatically brings together these issues. In this scene Huck has just written Miss Watson a note telling her where Jim can be found. He is about to pray but hesitates for a moment: But I didn't do it straight off, but laid the paper down and set there thinking; thinking how good it was all this happened so, and how near I come to being lost and going to hell. And went on thinking. And got to thinking over our trip down the river; and I see Jim before me, all the time, in the day, and in the night-time, sometimes moonlight, sometimes storms, and we a floating along, talking, and singing, and laughing. But somehow I couldn't seem to strike no places to harden me against him, but only the other kind. I'd see him standing my watch on top of his'n, stead of calling me--so I could go on sleeping; and see him how glad he was when I come back out of the fog; and when I come to him again in the swamp, up there where the feud was; and such-like times; and would always call me honey, and pet me, and do everything he could think of for me, and how good he always was; and at last I struck the time I saved him by telling the men we had ...read more.

While the novel does not suggest that the distorting projections of narcissism can be avoided altogether, it does seem to imply that such projections are enslaving if their origins in the fantasizing subject, as well as the difference between them and the objects they transfigure, are not recognized. {22} Structurally the novel reinforces this idea by complying with the formal requirements of plot and also testing the limits of those requirements through a complex use of irony. Despite the fact that the two key pieces of information generating the suspense of the narrative--the death of Pap and Jim's freedom--are only made explicit at the conclusion of the novel, the text does offer certain submerged indications that the overt intentionality of Huck and Jim's journey is a mere convention, a structurally necessary, if hollow, plot device. It has been pointed out many times before that while Jim claims he is escaping from his servitude, the direction of his flight indicates otherwise: he travels south, into the region of slavery, toward Cairo--the lexicography of which suggests the biblical land of slavery, Egypt. Critics have attempted to account for this inconsistency by attributing it to a contradiction in Mark Twain's overall project. Smith, for example, writes, "drifting downstream with the current . . . could not be reconciled with the plan to free Jim . . . hence the temporary abandonment of the story" (p. 116). This explanation is plausible only if we assume that Twain had intended to free Jim; this is certainly Jim's plan, and perhaps even the empathetic reader's, but not necessarily the plan of Mark Twain or of Huck, as retrospective narrator. They, after all, know that Jim is a free man; indeed, it could even be said that they ironically indicate this through the direction and destination of Jim's journey. {23} Moreover, the narrative prepares for the discovery of the dead man by initially establishing Pap's identity as the novel's most militant racist and then providing clues that intimate that the murder may have a racial dimension to it. ...read more.