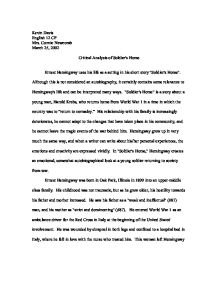 Kevin Davis English 12 CP Mrs. Connie Newcomb March 25, 2002 Critical Analysis of Soldier's Home Ernest Hemingway uses his life as a setting in his short story "Soldier's Home". Although this is not considered an autobiography, it certainly contains some relevance to Hemingway's life and can be interpreted many ways. "Soldier's Home" is a story about a young man, Harold Krebs, who returns home from World War 1 in a time in which the country was to "return to normalcy." His relationship with his family is increasingly deteriorates, he cannot adapt to the changes that have taken place in his community, and he cannot leave the tragic events of the war behind him. Hemingway grew up in very much the same way, and when a writer can write about his/her personal experiences, the emotions and creativity are expressed vividly. In "Soldier's Home," Hemingway creates an emotional, somewhat autobiographical look at a young soldier returning to society from war. Ernest Hemingway was born in Oak Park, Illinois in 1899 into an upper-middle class family. ...read more.

The second contradictory fact of the title is it's definition. According to the Oxford English Dictionary, a "soldiers home" is a recreational hall, created from charity where soldiers can read, play games, and write letters. This is a place where soldiers are treated respectfully and can relax and relieve the stress of war. After reading the story, this definition is completely the opposite of how Krebs is treated upon returning home. The major symbols in "Soldier's Home" are Krebs's parents. Krebs's relationship with his parents increasingly becomes more hostile, and this represents the veteran's view of postwar America. Krebs had the most difficulties with his mother, who represents society in postwar America. She does not understand the traumatic events that her son went through, and want things to return to normal. His dad represents the part of the country that wants to forget about the past and look towards the future. This is shown by his laid back attitude towards his son, and Krebs's mother does the talking for him. His sister represents another part of the country that doesn't acknowledge that the war even occurred. ...read more.

At the time of "Soldier's Home's" release, the country was awakened to the insensitivity in this country for its veterans, and this story supported these beliefs. Another ironic fact in "Soldier's Home" is a connection with Hemingway's former employer. Near the end of the story, Krebs's reads the Kansas City Star, the paper where Hemingway had formally worked. The symbolism behind this is that Krebs's went directly to the sports page without even glancing at any other article. At that time, so many events were happening in the news, but Krebs just wanted to move on without reading about the rest of the world's problems. To add to his parent's involvement in the story, his mother warns him not to "muss the paper". A "Soldier's Home" by Ernest Hemingway can still be very influential and relative to today's problems. Many veterans today still come home feeling unappreciated, and envision a grand welcoming that doesn't occur. The same happens with many college students who return home to a less than magnificent welcome, and cannot completely adapt to the sudden change in setting. Hemingway incorporated his own life experiences into this story to add even further attraction to this story, and used symbolism to represent society's insensitivity towards veterans. ...read more.