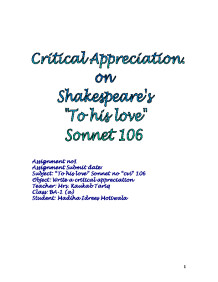 Assignment no1 Assignment Submit date: Subject: "To his love" Sonnet no "cvi" 106 Object: Write a critical appreciation Teacher: Mrs. Kaukab Tariq Class: BA-1 (a) Student: Madiha Idrees Motiwala Shakespeare, William, 1564-1616, English dramatist and poet, b. Stratford-on-Avon. He is considered the greatest playwright who ever lived. He is also a sonneteer. His father was John Shakespeare. In 1582 Shakespeare married Anne Hathaway, eight years his senior and pregnant at the time of the marriage. They had three children: Susanna, born in 1583, and twins, Hamnet and Judith, born in 1585. In 1594 Shakespeare became an actor and playwright for the Lord Chamberlain's Men, the company that later became the King's Men under James I. Until the end of his London career Shakespeare remained with the company; it is thought that as an actor he played old men's roles, such as the ghost in Hamlet and Old Adam in As You Like It. In 1596 he obtained a coat of arms, and by 1597 he was prosperous enough to buy New Place in Stratford, which later was the home of his retirement years. In 1599 he became a partner in the ownership of the Globe theatre, and in 1608 he was part owner of the Black friars theatre. Shakespeare retired and returned to Stratford c.1613. He undoubtedly enjoyed a comfortable living throughout his career and in retirement, although he was never a wealthy man. ...read more.

In praise of ladies dead and lovely knights; Dead - refers both to the ladies and lovely knights. Emphasizes that they all lived long ago. Then, in the blazon of sweet beauty's best Then- His reaction to the first word of first quatrain "When". This emphasizes the present. Blazon = emblazoning, A description, painting, or record of any kind; esp. a record of virtues or Excellencies. The term is heraldic, and to emblazon was to adorn something with heraldic devices, or with descriptions. Sweet beauty's best = the best of all beautiful things (persons), both in the sense of the best parts of them, and the most choice examples from among them. Of hand, of foot, of lip, of eye, of brow, A further description of the blazon of sweet beauty - hands, feet, lips, eyes, brows could all be singled out for special mention. These are also of course the parts the attributes of which are most praised by sonneteers. See for example 130: My mistress' eyes are nothing like the sun etc. I see their antique pen would have exprest Their antique pen = the style and subject matter of the writers of the ancient chronicles. Would have exprest = would potentially, if they were to be writing now, portray you etc.; would have described you, if you were alive then. The you as in the Earl. Antique in addition to the meaning of 'ancient and old-fashioned' also had overtones of 'fantastic, ludicrous and grotesque'. ...read more.

The language used is mostly the archaic way of writing as was common to the Shakespearean ages. There is alliteration used in the first lines of all three quatrains. E.g. When and wasted in first quatrain Blazon, beauty and best in second quatrain Praises and prophecies in third quatrain. There is a use of personification in the third line of second quatrain where the quality of a living being is given to their antique pen, for it is the poets who write not their pens which are only tools. There is also symbolism in the last line of the sonnet when it is said they lack tongues to praise. The word tongue is symbolic of the poetry written by the poets long ago. Shakespeare has produced the image of time as it ages and continues to age, he has also shown us through his words the beauty possessed by the Earl, a kind of beauty that though he shows it to us, he contradicts it by saying that his portrayal of that beauty is no sufficient to that of the Earl. My personal evaluation is that Shakespeare praises the Earl too much. I personally believe that beauty is in the eye of the beholder and even an ugly thing becomes beautiful when looked upon in the correct way. And it is presumptuous of him to think that the Earl is so beautiful that he demeans his ancestors by saying that they cannot write. And I personally feel that to eulogize to such an extent bends an imagination towards romanticizing. 1 ...read more.