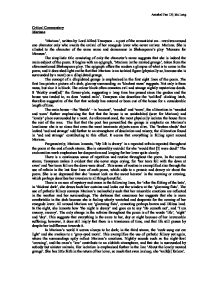 Critical Commentary Mariana 'Mariana', written by Lord Alfred Tennyson - a poet of the romanticist era - revolves around one character only who awaits the arrival of her renegade lover who never arrives: Mariana. She is alluded to the character of the same name and demeanour in Shakespeare's play 'Measure for Measure'. The simplistic title consisting of only the character's name suggests that she is indeed the main subject of the poem. It begins with an epigraph, 'Mariana in the moated grange', taken from the aforementioned Shakespeare play. The epigraph offers the readers a glimpse of what is to come in the poem, and it does shed light on the fact that Mariana is an isolated figure (physically so, because she is surrounded by a moat) on a dilapidated grange. The concept of a dilapidated grange is emphasised in the first eight lines of the poem. The first line paints a picture of a dark, gloomy surrounding, as 'blackest moss' suggests. Not only is there moss, but also it is black. The colour black often connotes evil and strange nightly mysterious deeds. It 'thickly crust[ed]' the flower-plots, suggesting a long time has passed since the garden and the house was tended to, as does 'rusted nails'. Tennyson also describes the 'unlifted' clinking latch, therefore suggestive of the fact that nobody has entered or been out of the house for a considerable length of time. ...read more.

All around Mariana are 'glooming flats', connoting perhaps barren and lifeless land. In the night, she laments how 'the night is dreary' and goes on to say 'He cometh not', and 'I am aweary, aweary'. The only change in the refrains throughout the poem is of the words 'life', 'night' and 'day'. This suggests that everything is the same to her, day or night because of her irrevocable suffering; however, it does still imply that there is a transience of time, and that life still passes by despite her indifference towards it. In Mariana's world it seems always to be dark; in the third stanza, the 'c**k sung out ere light' and she awakes to a 'gray-eyed morn'. This exemplifies the use of pathetic fallacy yet again, where the surroundings aptly reflect Mariana's emotions. Nightly sounds such as the night-fowl 'crowing', and the oxen's 'low' contribute to an eldritch atmosphere, and that she is surrounded by nobody but sinister animals. Her isolation is emphasised further in the line 'About the lonely moated grange'. She has little faith in the return of her lover, so much that even in sleep, she 'walk[s] forlorn'. The fourth stanza goes on to describe the surroundings of the grange, a stone-cast from the wall away. Everything beyond the grange is, also, still: the 'sluice with blacken'd waters slept' and 'marish mosses crept'. ...read more.

There is further reference to the 'wooing wind aloof the poplar made', underscoring her desperation for her lover. The personification of the wind suggests that the sound is indeed amplified in Mariana's senses, thus highlighting her loneliness once more. The 'thick moted sunbeam' suggests that there is dust when rays of light cut through the air, indicative of the derelict nature of the house. These rays of light are 'sloping towards his western bower', suggesting that it is sunset. Sunsets typically allude to the end of a day, and this aptly forms a closure to the poem. it could, however, also allude to the 'sunset of her life' as she does go on to say ' I am very dreary/ He will not come', the tone being definitive as opposed to the refrains in the other lines which merely say 'My life is dreary/ He cometh not'. Mariana also for the first time weeps, which signals the culmination of her desperation and jadedness. The tone of the poem is a contemplative one, and exudes an air of lament. The poem constitutes no action and no narrative whatsoever. In effect, it seems to be a 'freeze frame' of Mariana's life at the grange, thus capturing the essence of her misery whilst she ponders and bemoans the nonappearance of her lover. The rhyme scheme is reflective of the era Tennyson lived in, where most poems were meticulously structured; the refrain contributes to a mysterious chant-like effect that altogether represents the monotony of Mariana's life. Annabel Tan 12i; Ms Leng ...read more.

The writer makes good efforts to link subject matter with poetic technique, which is what a 'critical commentary' should do. Sometimes, however, the analysis lacks sharp focus and precision.
It might also be worth considering alternative ways of structuring a critical commentary. Here, the approach is to give a stanza by stanza account, picking out what seem to be relevant points. Alternative approaches might be more successful in giving an overview of the poem, for example a section on the tone and mood of the poem; another on pathetic fallacy,including the contribution made by alliteration, assonance, personification;another on the effects of rhyme and rhythm and another on how all this might affect reader response.
***