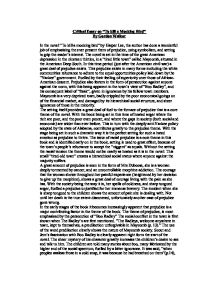 Critical Essay on "To kill a Mocking Bird" By Gordon Walker In the novel "To kill a mocking bird" by Harper Lee, the author has done a wonderful job of emphasising the ever present them of prejudice, using symbolism, and setting to grip the reader's interest. The novel is set in the time of the great American depression in the nineteen thirties, in a "tired little town" called Maycomb, situated in the American Deep South. In this time period (just after the American civil war) a great deal of prejudice exists. This prejudice exists in many forms including the white communities reluctance to adhere to the equal opportunities policy laid down by the "Yankee" government. Fuelled by their feeling of superiority over those of African-American descent. Prejudice also festers in the form of persecution against anyone against the norm, with this being apparent in the town's view of "Boo Radley", and his consequent label of "freak", given in ignorance by his fellow town members. Maycomb is a very deprived town, badly crippled by the poor economical goings on of the financial market, and damaged by its hierarchical social structure, and sheer ignorance of those in the minority. The setting itself provides a great deal of fuel to the furnace of prejudice that is a core theme of the novel. With the book being set in this time of heated anger where the rich are poor, and the poor even poorer, and where the gaps in society (both social and economic) ...read more.

The sheer mystery of his character greatly increases the children's desire to see and talk to him. The children are told many stories about boo, many fabricated by the higher end of the social spectrum, fuelled by a bitter ignorance. It was said, "when peoples azaleas froze in a cold snap, it was because he had breathed on them"(p.14), and also "Radley pecans killed you". This popular myth, a cruel, callowness creation of the unknowing children, and greatly influenced by the somewhat childish ignorance of their elders. It was facts like these that lead the children (and for that matter the entire town) to believe that Boo Radley was something he truly wasn't, a rumour making the kids think of "...making Boo Radley come out."(p.14). Jem, scout and dill were to find out that the rumours were not to be believed, and this was their first taste of prejudice, and how it can be horribly wrong. The children devised a number of ways of "making boo come out", picking the most inconspicuous ways possible, fuelled by their so-called knowledge of his character. These included several approaches to the "Radley place". One particular time that they decided to investigate was one night when they entered the Radley property, during all the commotion gunshots were fired and, jem unintentionally lost his "pants" in the Radley fence. ...read more.

Scout herself finally realise this when she wonders what it must be like to "stand in his shoes and walk about in them", she has over come the prejudice, and understands his ways. So in conclusion, throughout the course of the novel the theme of prejudice is explored in great detail, being interwoven into the plot with extensive detail using setting and symbolism to astonishing effect. The use of setting is extensive, and essential to the story as it provides a solid foundation for the writer to build the theme of prejudice on, and through extensive use of symbolism she expands and elaborates on the theme to create a very, deep and thought-provoking novel. Not only do the characters show the power, and evil that prejudice can bring, as well as its devastating effect, but also how it can be conquered. The way, in which Boo Radley proved his worth and showed the whole town, really does prove that prejudice is ignorance. It also shows that as atticus stated to get to know someone truthfully, extensively, and fully, your really need to "climb into they're skin". Although the literal has little meaning, the hidden message says, we all deserve to be treated the same, but let everyone live their life how they want to. It also shows that not through prejudice, but understanding and compromise can we create a better society, backed by the words of a great prophet, "I may not agree with what you say, but I will defend to death your right to say it". ...read more.