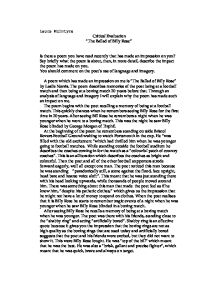 Laura McIntyre Critical Evaluation "The Ballad of Billy Rose" Is there a poem you have read recently that has made an impression on you? Say briefly what the poem is about, then, in more detail, describe the impact the poem has made on you. You should comment on the poet's use of language and imagery. A poem which has made an impression on me is "The Ballad of Billy Rose" by Leslie Norris. The poem describes memories of the poet being at a football match and then being at a boxing match 20 years before that. Through an analysis of language and imagery I will explain why the poem has made such an impact on me. The poem begins with the poet recalling a memory of being at a football match. This quickly chances when he remembers seeing Billy Rose for the first time in 20 years. After seeing Bill Rose he remembers a night when he was younger when he went to a boxing match. ...read more.

The poet was there with his friends, standing close to the "shabby ring" and acting "artificially bored". Shabby ring is an effective quote because it gives you the impression that the boxing rings are not as high quality as the boxing rings that are used today and artificially bored suggests that the poet and his friends were excited, but they did not want to show it. This were Billy Rose fought. He was "top of the bill" which meant that he was the best. He was also a "brisk, gallant and precise fighter", which meant that he was quick, brave and always on target. Then the poet remembers one of his friends being sick, but the poet and the rest of his friends quickly "threatened his cowardice with an embarrassed kick" because they fought he was acting like a child and they were trying to look grown up. The rest of them were tough enough not to let seeing Billy Rose "ripped across both his eyes" affect them the way it effected there friend Donald Davies. ...read more.

I enjoyed reading this poem because the poet used a number of different themes which made the poem more enjoyable to read. These themes are violence and guilt. Guilt is mostly revealed through the poet's feelings; this is because he feels sorry for everything that happened to Billy Rose and he feels as if the blinding of Billy Rose was his fault. Violence is another main theme because the main point of the poem is the blinding of Billy Rose. The last line of the poem shows one of the main feelings of guilt because he thinks he was the one that was responsible for the blinding of Billy Rose. I thought the poet described events and people with a lot of detail; an example of this was when Billy Rose was described as a "brisk, gallant and precise" fighter which helped you imagine how good he was. This is just one example which shows how well the poet describes things in detail. ...read more.