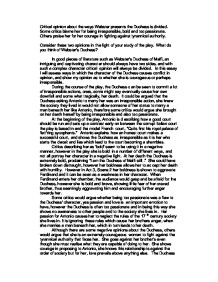 Critical opinion about the ways Webster presents the Duchess is divided. Some critics blame her for being irresponsible, bold and too passionate. Others praise her for her courage in fighting against tyrannical authority.

Critical opinion about the ways Webster presents the Duchess is divided. Some critics blame her for being irresponsible, bold and too passionate. Others praise her for her courage in fighting against tyrannical authority. Consider these two opinions in the light of your study of the play. What do you think of Webster's Duchess? In good pieces of literature such as Webster's Duchess of Malfi, an intriguing and captivating character should always have two sides, and with such a complex character critical opinion will always be divided. In this essay I will assess ways in which the character of the Duchess causes conflict in opinion, and show my opinion as to whether she is courageous or perhaps irresponsible. During the course of the play, the Duchess can be seen to commit a lot of irresponsible actions, ones, some might say eventually cause her own downfall and some what tragically, her death. ...read more.

Some critics would argue whether being too passionate was a flaw to the Duchess' character, yes passion and love is an important emotion to have, however the Duchess is often too passionate and in being this way she shows no awareness to other people and to the society she lives in. Her passion for Antonio causes her to neglect the rules of the 17th century society she lives in. It is ignoring these rules which cause her brothers anger, when she marries a man beneath her, which in turn leads to her death. Although there are some negative opinions about the Duchess, others would argue that she is an extremely courageous woman to fight against the tyrannical authority that faces her. She goes against her brother's even though she must realise what they are capable of doing to her. She shows courage in proposing to Antonio, she knows this relationship is against the order of society but for her, love prevails above anything else. ...read more.

She is courageous in her boldness and in her passion hence the Duchess is a character to be admired and respected. Webster uses the Duchess of Malfi, a historical figure, to highlight the problems and orders of the society. I believe the Duchess illuminates that there is goodness in the society and this was Webster's point in creating her. Webster's play hence is a statement against the society at the time, however the Duchess doesn't survive the society, therefore I think Webster is trying to point out that the corruption that occurs in such a society has to end before more innocent lives are tragically ended. In conclusion although opinion about Webster's Duchess of Malfi is critically divided, I would sooner praise her for her courage in fighting against tyrannical authority rather than blame her for her own death due to being irresponsible, bold and too passionate. I think Webster created his Duchess in order to show that the Jacobean society they lived in was corrupt and it takes a strong person like the Duchess of Malfi to stand dignified within it. ...read more.