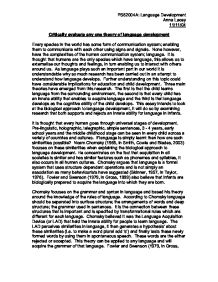 Critically evaluate one theory of language development. Chomsky argues that language is a formal system

Critically evaluate any one theory of language development Every species in the world has some form of communication system; enabling them to communicate with each other using signs and signals. None however, have the complexities of the human communication system; language. It is thought that humans are the only species which have language, this allows us to externalise our thoughts and feelings, in turn enabling us to interact with others around us. As language plays such an important part in our world it is understandable why so much research has been carried out in an attempt to understand how language develops. Further understanding on this topic could have considerable implications for education and child development. Three main theories have emerged from this research. The first is that the child learns language from the surrounding environment, the second is that every child has an innate ability that enables to acquire language and the third is that language develops as the cognitive ability of the child develops. This essay intends to look at the biological approach to language development, it will do so by examining research that both supports and rejects an innate ability for language in infants. It is thought that every human goes through universal stages of development. Pre-linguistic, holographic, telegraphic, simple sentences, 3 - 4 years, early school years and the middle childhood stage can be seen in every child across a variety of countries and cultures. ...read more.

He says that 'complex language is universal because children actually reinvent it'. This can be seen in labourers who have been imported into the sugar cane industry from China, Japan and Korea, who developed a pidgin language as a way of communication (Bickerton, 1990, in Smith, Cowie and Blades, 2003). The language that the labourers used had no grammatical structure and no consistent word order yet when their children were studied, despite only being exposed to the parent's speech, they used grammatical rules when talking. This suggests that the ability for language is innate as language seems to develop itself and translate non-grammatical sentences into grammatical sentences. It also shows that the child cannot be simply imitating the language of those around. This idea can be found in other societies as well as it has been found that most adult speech is not grammatical and that despite the parents disregard for grammar that the children still learn a grammatically correct language (Slobin, 1975, in Gross, 1999). Evidence to suggest reinvention of an existing language has also been replicated in deaf children. Children who had only been introduced to signs that the parents devised to communicate with them, were found to spontaneously devise their own signs and language (derived from the original signs) when grouped with other deaf children, (Kegl et al. ...read more.

It is clear from evidence provided by psychologists (Chomsky, 1957, Goldin -Meadow and Feldman, 1977 and Brown and Bellugi, 1964 etc.) that an innate ability is involved in the acquisition of language, however this does not explain all features of language development. Chomsky's biological approach focuses mainly on the acquisition of grammar and the rules employed to develop grammar in language. More recently Piaget has claimed that it is important to look at communication and understanding of language and not to focus solely on grammatical competence, (In Smith, Cowie and Blades, 2003). Piaget notes that in the first two years of development intellectual ability relies on sensori-motor skills not from symbols such as language. Piaget believes that the understanding and rules of language developed from the child's cognitive system, (Cromer, 1974, in Smith, Cowie and Blades, 2003). It is more likely that it is a combination of innate preparedness and cognitive ability that together produce the development of the language system that we communicate with. 1,667 words REFERNCES: Golinkoff, R. M. (1984).The transition from pre-linguistic to linguistic communication. Lawrence Erlbaum Associates. Gross, R. (1999) Psychology: The Science of Mind and Behaviour. (3rd Edition) Hodder and Stoughton. Smith, P. K, Cowie, H. and Blades, M. (2003). Understanding Children's Development. (4th Edition) Oxford: Blackwell. Taylor, I. (1976). Introduction to Psycholinguistics. New York: Holt, Rinehart and Watson. Wells, G and Nicholls, J. (1985). Language and Learning: An Interactional perspective. The Falmer Press ?? ?? ?? ?? PS52004A: Language Development Anna Lacey 11/11/04 ...read more.