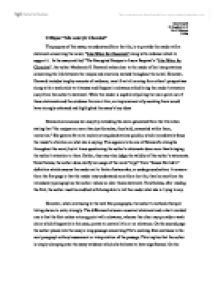 Critique: "Like water for Chocolate" The purpose of this essay, as understood from the title, is to provide the reader with a statement concerning the novel, "Like Water for Chocolate" along with evidence which to support it. In the essay entitled "The Encrypted Recipes in Laura Esquivel's "Like Water for Chocolate", the author Mackenzie E. Dennard makes clear to the reader of her interpretations concerning the link between the recipes and emotions evoked throughout the novel. However, Dennard includes lengthy amounts of evidence, most if not all coming from others' perspectives along with a weak stick-to-itiveness and frequent irrelevance which bring the reader's attention away from the author's statement. While the reader is capable of pulling the main point out of these statements and the evidence thrown at him, an improvement of presenting them would have strongly enhanced and highlighted the essay's key ideas Dennard commences her essay by extending the claim generated from the title when stating that "the recipes are more than just formulas, they hold, concealed within them, memories." ...read more.

However, when continuing to the next few paragraphs, the author's method of simple listing shows to exist, strongly. The difference between a succinct statement and a short-worded one is that the first makes a strong point with relevance, whereas the other may provide a weak claim which frequently in this case, proves to contain little or no relevance. On the second page the author places into the essay a long passage concerning Tita's cooking. She continues in the next paragraph without assessment or interpretation of the passage. This implies that the author is simply clamping onto the essay evidence which she believes to have significance. On the contrary, the evidence often is lengthy and doesn't focus on supporting the author's statement. When including long paragraphs of evidence from the novel, the reader tends to find himself tucked into the novel and realizing he is caught in its plot, rather than paying attention to the author's paper. ...read more.

Including irrelevant and long paragraphs to serve as evidence clearly show to deteriorate the strength of this essay. In essence, Dennard's strengths show to exist in providing evidence for her statements, yet, whether or not the evidence is relevant proves to be a different issue. Her listing, inclusion of lengthy passages of support, even the usage of unexplained, non-assessed claims all add up to actually subtract from the essay's general meaning. I firmly support Dennard's attempt at investigating Esquivel's connection between her recipes and underlying secrets. Nonetheless, I question the method by which Dennard was able to present her statements. At times, the points made by the author are well-taken and agreeable, yet the weak presentational skills strongly affect the reader's impression of the author. Fundamentally, while the reader is capable of pulling the main point out of these statements and the evidence thrown at him, an improvement of presenting them would have significantly and beneficially affected the author's essay. ?? ?? ?? ?? Henrik Rydh IB English A1 E Mr.s Doleman 2/2/06 ...read more.