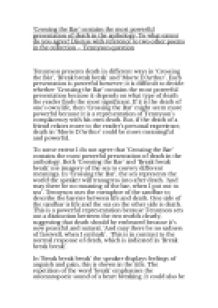 Crossing the Bar contains the most powerful presentation of death in the anthology. To what extent do you agree? Discuss with reference to two other poems in the collection Tennyson question

?O, well for the sailor lad, that he sings in his boat on the bay!? In contrast, the use of an exclamation mark in ?Crossing the bar? demonstrates the speaker?s excitement of death instead of feelings of enragement. ?Sunset and evening star, And one clear call for me!? This shows how the speaker is compliant of death because it is their own life and they are ready, however in ?Break break break? the speaker is demoralised because death has taken their friend without warning. ?Crossing the Bar? and ?Break break break? both present death powerfully, however ?Break break break? may appear more powerful because it uses an expression of grief caused by loss and uses intense emotions, like anguish. Then again, to some extent I do agree that ?Crossing the Bar? contains the most powerful presentation of death in the anthology, especially in comparison with ?Morte D?Arthur?. A similarity between ?Crossing the Bar? and ?Morte D?Arthur? is that they both discuss religion and relate them to death. ...read more.

In ?Morte D?Arthur? Arthur goes to Avilion, which could be a metaphor for heaven. However, he leaves behind a disorientated world with a lack of guidance. In comparison, the bar in ?Crossing the Bar? is also a metaphor for heaven, but the crossing is far more peaceful and conclusive. To conclude, I believe that ?Crossing the Bar? contains the most powerful presentation of death because in contrast to ?Break break break? Tennyson is conclusive ? he is being valiant about his own deaf or has come to terms with the grief of his friend and is ready to be reunited with him. ?And may there be no moaning of the bar?. Even the structure of the poem can represent the shortness of life. By having fewer words, they can hold more control and capture the attention of the reader. In contrast, ?Morte D?Arthur? is longer and this makes the presentation of death less powerful because the meaning may be lost as the poem is read. ...read more.