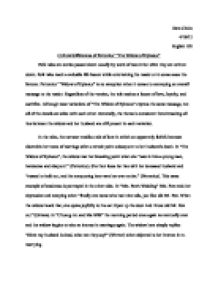 Sam Chuks 4/18/12 English 102 Cultural differences of Petronius' "The Widow of Ephesus" Folk tales are stories passed down usually by word of mouth but often they are written down. Folk tales teach a valuable life lesson while entertaining the reader or in some cases the listener. Petronius' "Widow of Ephesus" is no exception when it comes to conveying an overall message to the reader. Regardless of the version, the tale teaches a lesson of love, loyalty, and sacrifice. Although most variations of "The Widow of Ephesus" express the same message, not all of the details are alike with each other. Generally, the theme is consistent: love breaking all ties between the widow and her husband are still present in each variation. In the tales, the narrator recalls a tale of love in which an apparently faithful woman discredits her vows of marriage after a certain point subsequent to her husband's death. In "The Widow of Ephesus", the widow met her breaking point when she "saw in him a young man, handsome and eloquent." (Petronius). She then loses her ties with her deceased husband and "ceased to hold out, and the conquering hero won her over entire." (Petronius). This same example of weakness is portrayed in the other tales. ...read more.

In "The Widow of Ephesus" the soldier spends too much time with the widow that one of the criminal bodies are taken. The widow, out of newfound love, offers to give up her own husband to keep the soldier alive as well. This detail is included in some of the other versions of the tale. In "Here It Is Told of a Gentleman Whom the Emperor Had Hanged" The knight stumbles upon the widow after already losing the body he was charged with guarding. After very little discussion, the widow proclaims her love for the knight and easily gives up her husband's body for him when she says "so great is the love I bear you. Let us take this husband of mine, and draw him out of his sepulchre, and hang him in the place of the man who was taken from you." (Il Novellino). The same action is done in "The Perfidious Widow" and in "A Widow Digs Up Her Deceased Husband and Hangs Him on the Gallows". Like the original, the soldier leaves his post to attend to the widow and a body is taken. Out of newfound love, the widows in both tales offer to use their husband as a sacrifice or scapegoat to keep the soldier alive. ...read more.

Instead of the widow and the soldier being together after sacrificing the husband, the soldier instead expresses his dislike for the widow and her actions, saying "I don't like you, and I won't have you. You can go to the devil. After the way you treated your dead husband, how would you treat me, your living husband?"( Purselt). The ending in "Here It Is Told of a Gentleman Whom the Emperor Had Hanged" is similar in which the knight tells the widow generally the same idea: "Lady, since you showed so little regard for one towards whom you professed such love, so would you have even less regard for me." (Il Novellino). Petronius' "The Widow of Ephesus" is a folktale that has been modified by each culture to entertain and to teach. In their own ways, each version portrays the theme of love, loyalty and sacrifice. The general idea and plot in most of the tales are to some degree the same and employ the widow and the male figure characters to represent those of the original. Although the endings and how the tales play out differ greatly, they all sustain an identical theme: love breaking all ties between the widow and her husband. This theme defines the widow and associates all the other variations to the original tale, "The Widow of Ephesus". ...read more.