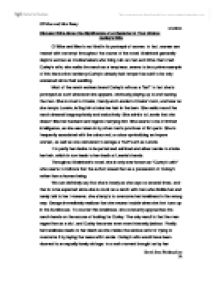 Discuss/ Write About the Significance of a Character of Your Choice: Curley's Wife Of Mice and Men is not kind in its portrayal of women. In fact, women are treated with contempt throughout the course of the novel. Steinbeck generally depicts women as troublemakers who bring ruin on men and drive them mad. Curley's wife, who walks the ranch as a temptress, seems to be a prime example of this destructive tendency-Curley's already bad temper has said to be only worsened since their wedding. Most of the ranch workers brand Curley's wife as a "tart". In fact she is portrayed as such whenever she appears, obviously playing up to and teasing the men. She is cruel to Crooks, Candy and Lennie in Crooks' room, and later on she tempts Lennie, letting him stroke her hair in the barn. ...read more.

However, she attempts to overcome her loneliness in the wrong way. George immediately realizes that she means trouble when she first turns up in the bunkhouse. To counter this loneliness, she constantly approaches the ranch hands on the excuse of looking for Curley. The only result is that the men regard her as a slut, and Curley becomes even more intensely jealous. Finally, her loneliness leads to her death as she makes the serious error of trying to overcome it by laying the tease with Lennie. Curley's wife would have been doomed to an equally lonely old age. In a rash moment brought on by her disappointment at not being in the movies, she marries Curley and soon regrets it. She appears at the door of the bunkhouse and later in Crooks' room pretending to be looking for her husband when she is actually just looking for company. ...read more.

Although her purpose is rather simple in the novel's opening pages-she is a "tramp", "tart" and "bitch" that threatens to destroy male happiness and longevity- her appearance later in the novel becomes more complex. When she confronts Lennie, Candy and Crooks in the stable she admits to feeling a kind of shameless dissatisfaction with her life. Her vulnerability at this moment ,and later when she admits to Lennie her dream of becoming a movie star, makes her utterly human and much more interesting than the stereotypical vixen in fancy red shoes. However, it also reinforces the novel's grim worldview. In her moment of greatest vulnerability, Curley's wife seeks out even greater weaknesses in others, preying upon Lennie's mental handicap, Candy's debilitating age, and the colour of Crooks' skin in order to steel herself against harm. Of Mice and Men Essay 2/1/2011 Sarah Jane Baldacchino 1A ...read more.

This is a sound enough essay which aims to analyse the character of Curley's wife. There is much to say about this character though she is an arguably easier character to pin-point than say, George or Curley. The candidate makes ...

This is a sound enough essay which aims to analyse the character of Curley's wife. There is much to say about this character though she is an arguably easier character to pin-point than say, George or Curley. The candidate makes a good effort, though is prevented from reaching the highest grade boundaries due to lack of content and depth. Whilst what they have written is all entirely accurate, there are some missed opportunity for analysis (more on this later).

The structure of the essay is fine enough, and all information is clear, but a more clear-cut, organised approach would help cover the points far more easily. If the candidate were attribute each paragraph to a certain quality about Curley's wife (e.g. speech, costume, name, interactions with others, etc.) then the analysis will flow less forcibly.

The Level of Analysis is fair but lack the depth and extensive coverage required of a top band answer. This candidate would be looking at a high C grade for A Level with this answer, as some important points are missed. What can we deduce from Curley's wife's name? What is Steinbeck saying and reinforcing when we learn she will never be addressed by her full name and instead only impersonal insults like "bitch" and "tart"? Also, there analysis of her costume could go further. The candidate was good to pick up on the red but red is not simply "a colour symbolizing impure women", but it is also the colour of passion, love, intensity and anger (the bull comparison is brilliant). The candidate could therefore take this analysis further by considering how Steinbeck describes her stance/gait/gestures - do we get the feeling she is flirtatious? Bold? Attention-seeking? How? There are more ways than simply quoting what the other characters have to say about her, as Steinbeck gives her plenty of description throughout the novel and it should not be ignored.

I really enjoyed the comments on the perception of vulnerability on Curley's wife towards the end, where she and Lennie are alone in the barn. But how does this factor into her character? What does it show when we find that she is still desperate for attention? And if the candidate really wants to impress, they could bring in the American Dream and the danger of traversing too close to our desires (Curley's wife's being attention and affection, which she does not get from Curley). How does her American Dream see her end? This is the level of detail required to get top marks, but even to improve this answer to a solid B grade the candidate simply needs to fill out some hole and correct a few points, elaborate on some of the aforementioned ideas they should be fine.

The Quality of Written Communication is very good. All manner of written English must be good for any candidate to do well and this candidate has taken extra time to ensure that their written expression is clear and precise, opting to use a wide range of vocabulary and punctuation - showing the examiner their confidence with the English language and their essay writing abilities - to ensure their answer is well-written and expressed.