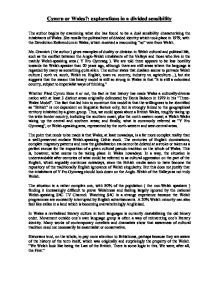 Cymru or Wales?: explorations in a divided sensibility The author begins by examining what she has found to be a dual sensibility characterizing the inhabitants of Wales. She recalls the political test of divided identity which took place in 1979, with the Devolution Referendum in Wales, which received a resounding "no" vote from Welsh. Ms. Gramich ( the author ) gives examples of duality or division in Welsh cultural and political life, such as the conflict between the Anglo-Welsh inhabitants of the Valleys and those who live in the mainly Welsh-speaking area ( Y Fro Gymraeg ). We are told there appears to be less hostility towards the Welsh-speaker than 20 years ago, although there are still areas where the language is regarded by many as something quite alien. ...read more.

The point that needs to be made is that Wales, at least nowadays, is a far more complex reality than a well-preserved enclave Welsh-speaking Celtic stock. The centuries of English dominations, complex migratory patterns and now the globalization era cannot be deleted at a stroke or taken as a perfect excuse for the imposition of a given cultural pseudo-tradition on the whole of Wales. This is, however, what seems to be taking place in Wales nowadays. In a way, the situation is understandable after centuries of what could be referred to as cultural oppression on the part of the English, which arguably continues nowadays, since the British media seem to have become the repository of the traditionally English ignorance of Welsh singularity. But this does not justify that the inhabitants of Y Fro Gymraeg should look down on the Anglo-Welsh of the Valleys as not truly Welsh. ...read more.

Historians tend, on the whole, to pay more attention to Britishness, perhaps because they are aware of the history of the term itself, which was originally and surprisingly the property of the Welsh. "We Welsh look like being the Last of the British. There is some logic in this. We were, after all, the First." The invisibility of Wales as a separate cultural and political entity is a constant source of annoyance to the Welsh. One thing which tends to diminish the notion of Wales as a separate entity is the practice of combining England and Wales together as a single unit. Even the television weather reports speak of meteorological conditions in "England and Wales", while virtually all government statistics also cover the same strange territory. There is no doubt that English culture has been enormously influenced by Scotland, Ireland and Wales. Welsh studies must turn its attention to itself initially and not to the ways it has infiltrated neighbouring cultures. ...read more.