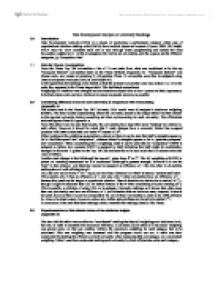 Data Envelopment Analysis in University Rankings 1.0 Introduction Data Envelopment Analysis (DEA) is a means of producing a performance measure where sets of organisational decision making units (DMUs) have multiple inputs and outputs. (Dyson, 2000, OR Insight Vol13 Issue 4). DEA considers each unit in turn through linear programming and selects the most favourable weights for it. In this investigation the DMUs are universities, and the outputs are the different categories, ie 'Completion Rate' 1.1 Data Set Chosen / Assumptions From the Times Top 100 universities a list of 12 was made from what was considered to be the top "Computer Science" universities listed on the Times Website (Appendix d). "Computer Science" was chosen solely as a means of selecting 12 Universities. These 12 universities were then investigated using Data Envelopment Analysis (DEA) in EXPRESS-IVE. In the appendices the rankings were altered so that the selected universities were also ranked 1 to 12 in the order they appeared in the Times league table. This facilitated comparisons. Weightings of variables were changed and are therefore subjective as to how I perceived their importance. 4 decimal places were used as a minimum to ensure as greater accuracy as possible. 2.0 Calculating efficiency scores for each university & comparison with Times listing (Appendix a) The criteria used in the Times Top 100 University DEA model were all assigned a minimum weighting (0.0001). The item number (representing where the university placed in the league table) was then altered to the required university before compiling and then run/re-running for each university. The efficiencies and rankings are listed in Appendix a. From this table it can be seen that broadly the universities have kept their same "ranking" (in relation to each other). ...read more.

It is weakest at 'student-staff ratio', yet because this is weighted the least it is not enough to pull it from the top spot. Further, it can be seen that Cambridge comes top in the second most heavily weighted category and also performs consistently well in the other 3 categories. Imperial College consistently comes in 3rd bar 1 of the categories explaining why it hasn't moved. The only other University not to move is Surrey University (12th), though it should be noted from Appendix b that by solely using a maximised weighting on Graduate Prospects it could move up to 8th. It performs consistently poorly in the other 3 variables. The differences, however, lie in the middle of the rankings. The greatest shift in the position in the league table is St Andrews, which has shifted from 6th to 11th. This is due to the adverse weighting of the 4 variables against it's strengths. Appendix b shows where it's strengths and weaknesses lie in relation to the other universities. In this scenario the strongest variable: 'students-staff ratio' is weighted with least importance of the 4 variables, and one of it's weakest variables is weighted as one of the most important (2nd), accounting for its slip in ranking in the tables. Edinburgh is the other university to see a significant slip in the rankings through these weightings. (From 4th to 7th). Again this is likely to be weighting in a "weak" area of the University", in this instance 'graduate prospects'(Appendix b). Conversely Bristol and Bath are both seen to have climbed 4 places in the rankings. This is largely because they both score highly in 'graduate prospects', with Bristol also placing 3rd in 'good honours'. ...read more.

Based on these results students "wanting a good time at university and a good job afterwards" might look at Imperial as the top choice, followed by Oxford. The 3rd best option is Bath (perhaps most surprising of all when considering it's prior ranking was 10th), and whereas the other 2 previously lower ranking universities Southampton and Surrey might not previously be viewed as high options, now lie in 5th and 7th positions respectively and so might have closer attention paid to them. Edinburgh, UCL and St Andrews are now not likely to be as considered as they move either 4 or 5 places down the rankings. This just goes to show how the entire list of universities can drastically change ranking with a factor likely to fluctuate year upon year. 4.0 Conclusion In conclusion to all of the above scenarios, Oxford appears to be the best option as it deviates from 1st only once (when compared to The Times rankings) where it ends up 2nd in the table (when looking at the "good times at University and good job afterwards" scenario). Cambridge and Imperial appear to consistently perform well. However even these change in the final scenario. People cannot be put into boxes, and in a sense DEA could be considered a victim of its own creation; by eliminating so much of the subjectivity associated with it, it creates an initial stage of subjectivity; that of deciding the weightings. Individuals have different needs and goals and therefore a model such as this needs to be used cautiously as evidently there are various other factors that need to be taken into consideration, many of which are unquantifiable without bias. ...read more.