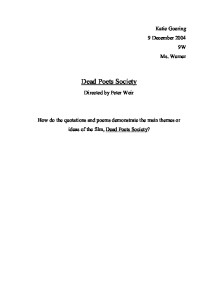 Katie Goering 9 December 2004 9W Ms. Werner Dead Poets Society Directed by Peter Weir How do the quotations and poems demonstrate the main themes or ideas of the film, Dead Poets Society? The film, Dead Poets Society, directed by Peter Weir, is set in the 1950's at Welton Academy in the United States. Welton is a school that is based on honor, discipline, tradition, and excellence. The teachers at this school are extremely strict and academic. The Dead Poets Society has many important themes and messages, which should be considered in one's daily life. The film teaches to enjoy oneself and live life to the fullest. It also demonstrates the value of friendship, which is dealt with in the film as loyalty, betrayal, forgiveness, and love. Dead Poets Society also shows the significance of poetry and how it expresses many emotions frequently experienced by people. Mr. Keating informs the boys that poetry helps people understand themselves, feel alive, and appreciate life. Another message in the film involves making the right decisions, learning from selections one makes, and the results of one's choices. Finally, Dead Poets Society touches on finding one's voice and doing what one believes is right. ...read more.

Each choice on makes changes one's life, no matter how large or small the decision is, which is why it is important to consider the consequences of our selections. All through the film, decisions are made. One major decision in the film is Neil's choice to commit suicide as a way of solving his problems instead of persevering. In fact, Neil's suicide had many consequences, which created only more worriment and dilemmas. As a result of Neil's death, Charlie was expelled, Mr. Keating was fired, and everyone that knew Neil was greatly upset. Many others were greatly affected by Neil's suicide as well. Another example of a prominent choice made is when Todd stands on his desk at the end of the film, and says, "O captain, my captain" in order to demonstrate his respect and gratitude toward Mr. Keating. He takes a risk because he could be expelled or suspended for disobeying Mr. Nolan who was ordering him to sit down. Many decisions we make should involve risk. Sometimes choosing to make a different decision to others can lead to better outcomes. In Robert Frost's poem 'A Road Not Taken', he compares life and decisions to paths in some woods. ...read more.

He had the courage to stand up on stage in front of hundreds of people and he was able to follow his dream even though his father forbid him to. In contrast, an example of negative courage is when Charlie pretends that a phone is ringing during an assembly and pretends that it is a message from God stating that girls should be allowed at Welton Academy. Charlie is seizing the day in the wrong way. Even though he is confident and happy while playing this joke, he risks the secrecy of the Dead Poets Society and makes the other boys worried. The poem by Robert Frost, titled 'A Road Not Taken' is connected to these events in the film because the poem implies that decisions change one's life. In the film, Neil chooses well by deciding to follow his dream, Todd makes a good decision by standing up for what he believes in. On the other hand, Charlie should have considered his choice and the results of his choice before taking the action. There are many significant messages and themes throughout the film, which are connected to life, friendship, loyalty, courage, betrayal, seizing the day, the true meaning of poetry, love, passion, and making decisions. These messages are also represented in numerous poems and quotations. Both the poems and the film give us messages to think about and help us live a fulfilled life. ...read more.