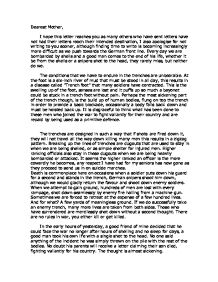 Dearest Mother, - letter from a soldier in the first world war

Dearest Mother, I hope this letter reaches you as many others who have sent letters have not had their letters reach their intended destination, I also apologise for not writing to you sooner, although finding time to write is becoming increasingly more difficult as we push towards the German front line. Every day we are bombarded by shells and a good man comes to the end of his life, whether it be from the shells or a snipers shot to the head, they rarely miss, but neither do we. The conditions that we have to endure in the trenches are unbearable. At the foot is a six-inch river of mud that must be stood in all day, this results in a disease called "Trench foot" that many soldiers have contracted. This is the swelling up of the foot, senses are lost and it puffs up so much a bayonet could be stuck in a trench foot without pain. Perhaps the most sickening part of the trench though, is the build up of human bodies, flung on top the trench in order to provide a basic blockade, occasionally a body falls back down and must be hoisted back up. It is disgraceful to think what has been done to these men who joined the war to fight valiantly for their country and are repaid by being used as a primitive defence. ...read more.

As the two men approached the canisters, a number of German soldiers appeared and duly shot them down. It was as if they appeared from nowhere, we had been set-up. The enemy was too far away to be within firing distance, all that could be done was to wait and watch. A single German soldier approached the canisters and released the gas, before retreating. With the wind towards us, it wasn't long before the gas would reach us. A call came for us to strap on our gas masks and retreat, although for some, it was far too late. Men began to wheeze and cough under the influence of the deadly gas, the masks seem to have little effect for some. Eyes would bulge from their sockets in a devilish way. It was as if they were overcome by evil. A truly horrendous sight, after an hour or so the wind changed direction and we could continue our path, with the walking wounded. Those who could not see dumbly walked on, tagging with the soldier ahead of them. Those who were dead were simply left behind; there was no time for burial, only for retribution. The bitterness I am feeling is unlike me, I no longer know my own true character. I just have urges to kill and maim the people who have killed my compatriots. Although this bitterness is not just of the enemy, but also of my own country, whom I chose to fight for. ...read more.

Letters, such as this one, which should reach you via a friend of mine on leave, would otherwise not be allowed through. A ranked officer must read all outgoing letters, and those that contain "inappropriate material" will not get through. In extreme cases, being court-martialled is an option for the people in charge. I doubt if I can write you a letter of such sincerity to you again, because of those not smuggled from the frontline are prohibited. However I will be waiting for a reply with great anticipation. Hopefully I will still be alive to read it, if not, all hope is not lost, death may be my only chance of escape. New orders are thought to be coming in any day, with the command to advance and go "over the top", with any luck I'll have made it, although few others will have in comparison to the great numbers being sent out. More men are arriving every day, younger and younger by the minute I wouldn't doubt that we are running out of suitable candidates to die for their country, perhaps soon the elderly will be asked. I hope the brutal honesty of my letter has not been too shocking for you, if I make it through a couple more weeks, I will be able to return home and see you all once again. That's the only thing that has been in my mind since the first day I joined this war. Send my love to the rest of the family. Dearest wishes and love, Your son Jeremy Beagle ...read more.