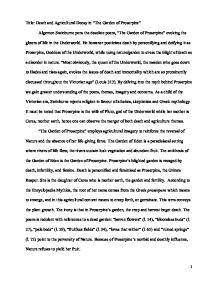 Death and Agricultural Decay in &quot;The Garden of Proserpine

Title: Death and Agricultural Decay in "The Garden of Proserpine" Algernon Swinburne pens the desolate poem, "The Garden of Proserpine" evoking the gloom of life in the Underworld. He however poeticizes death by personifying and deifying it as Proserpine, Goddess of the Underworld, while using nature/garden to stress the blight of death as a disorder in nature. "Most obviously, the queen of the Underworld, the maiden who goes down to Hades and rises again, evokes the issues of death and immortality which are so prominently discussed throughout the Victorian age" (Louis 313). By delving into the myth behind Proserpine we gain greater understanding of the poem, themes, imagery and concerns. As a child of the Victorian era, Swinburne rejects religion in favour of atheism, skepticism and Greek mythology. It must be noted that Proserpine is the wife of Pluto, god of the Underworld while her mother is Ceres, mother earth, hence one can observe the merger of both death and agriculture themes. ...read more.

The poppy is a wild flower which historically symbolizes sleep and death: sleep, because of its opium content and soporific effect; and death, because of its commonly blood-red colour (Grieve). In the Pagan and Christian tradition, death is likened to a sleep. Indeed, in tandem with this comparison, Proserpine's garden becomes "the sleepy world of streams / ... (and) dead dreams" (l.8) while the fallen "bow themselves and slumber" (l. 35). At the end of the poem, deathly dreams end in a "sleep eternal in an eternal night" (l. 95-96). Death is portrayed as a sleep because of the state of unconsciousness experienced and prevailing darkness. In Proserpine's garden lies a vinery and winepress. Grapes and wine have many meanings: they are "a sacrificial symbol" (Unwin 66), symbolize "death" (Unwin 60), "rebirth" (Unwin 60) and "contact with the gods" (Unwin 60). Therefore one can link these symbols of wine as they pertain to the myth of Proserpine for Proserpine's winepress represents an instrument of human sacrifice from which men's blood is squeezed. ...read more.

The bleak, cheerless aspect and palling darkness pervade the atmosphere. In this accursed garden, there is "no growth of moor or coppice/ No heather-flower or vine" (l. 25) and "flowers are put to scorn" (l. 64). Swinburne reinforces the point that there is no beauty in death. The recurrent pallid colour in the poem refers to deathly sickness. According to Encyclopedia Mythica, the sickly body of water which flows through Proserpine's garden is the mythological River Styx which means the river of hate. The River Styx separates the living from the dead and conveys the living souls to the other side (Dawson). Allusions to the Styx lie in the verse, "wan waves and wet winds labour/ weak ships and spirits steer" (l. 19-20). In sum, "The Garden of Proserpine" tells of a poisoned, disordered Nature where there is no life, health, nor beauty. The ground does not give her good yield, the ambience of heavy with sleep, the yearly seasons do not follow their natural order and the prevailing colours are pallor and redness. The poem underscores man's futility to control his fate, and existence. Since time marches on, gradual decay and desolation result. ...read more.