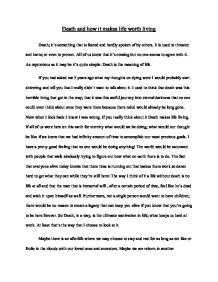 Death and how it makes life worth living

Death and how it makes life worth living Death; it's something that is feared and hardly spoken of by others. It is used to threaten and harm; or even to protect. All of us know that it's coming but no one seems to agree with it. As mysterious as it may be it's quite simple: Death is the meaning of life. If you had asked me 5 years ago what my thoughts on dying were I would probably start shivering and tell you that I really didn't want to talk about it. I used to think that death was this horrible thing that got in the way; that it was this awful journey into eternal darkness that no one could even think about once they were there because there mind would already be long gone. ...read more.

I have a pretty good feeling that no one would be doing anything! The world would be saturated with people that walk aimlessly trying to figure out how what on earth there is to do. The fact that everyone alive today knows that there time is running out that makes them work so d**n hard to get what they can while they're still here! The way I think of it a life without death is no life at all and that the man that is immortal will , after a certain period of time, feel like he's dead and wish it upon himself as well. ...read more.

Maybe we are reborn in another dimension; invisible to our descendants and our duty is to watch over them. It can even be argued that all of our spirits are intertwined since before we are born and that dying is a journey back to finally meet our god; and actually see our point of origin. Death is mysterious but also important. It's what makes us love what we know won't last and what makes us put so much effort into helping the next generation. What exactly does all of this mean? You can choose to waste the limited amount of time you have left thinking about it; but I guess I won't know until I die. ...read more.

This English composition piece makes for a very thoughtful commentary on a very commonly brushed-aside topic. The candidate has written very candidly about their beliefs about death, but not before introducing the essay with an introduction about the presence of ...

This English composition piece makes for a very thoughtful commentary on a very commonly brushed-aside topic. The candidate has written very candidly about their beliefs about death, but not before introducing the essay with an introduction about the presence of death in our lives. The introduction is odd; I would argue it comes across as a little 'too GCSE' in that it makes sweeping links between some intangible nouns (labelling it "mysterious", etc.) without really going into too much detail and then suddenly venturing off into the body of the essay they intended to write, so the introductory paragraph comes across as something laboriously obligatory rather that welcomes readers into the tone of the essay. Nonetheless, the introduction does encourage some very insightful comments about death and what it means to people and to the writer themselves. In many ways this is a very personal essay, and may benefit from adding another point of view, but more on this later.

The Level of Analysis is not marked here. Instead the ability to express ideas critically and personally (AO1) and the ability to link these ideas with other people and the wide picture (AO2, contextual appreciation) are marked.

This candidate presents there idea about death clearly - that death is actually a motivator, though the essay does come up a little short in satisfying the rather large claim made in the introduction that "Death is the meaning of life". With only the idea that, were we never to die, we would simply be lazy the candidate brings forth an interesting idea, but fails to explore it to what feels like it's full potential, only touching on the lack of motivation to get things done, or that death acts as more of a fact of life and therefore takes it's position as chief motivator without us really realising. To improve this answer, the candidate could bring in another point of view, to make it feel less subjective (ideally a contrasting point of view, which they would then critically dispute). For instance, what do Asian cultures believe about death? What happens when we die? How about Muslims or Hindus? Though this is very briefly touched upon in the mentioning of the afterlife, the candidate could look to be more explicit in how they incorporate external viewpoints into their essay (this would required plenty of research and, though this will require much effort, it will really pay off in the end because examiners love to see this).

The Quality of Written Communication (QWC) could do with a once-over. The candidate's QWC does not, on the whole, compromise the clarity of the essay but to have so many frequent typing and spelling errors is not acceptable at A Level. Candidates must re-read and spell-check all their essays for any inconsistencies in grammar or errors in punctuation and spelling to ensure that their written expression is as clear and precise as possible, because in a subject with such a great need for goof English skills, candidates cannot expect to achieve high grades if the essay reads badly.