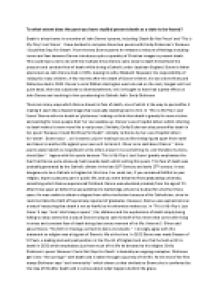 Death is a key theme in a number of John Donnes poems, including Death Be Not Proud and This Is My Plays Last Scene. I have decided to compare these two poems with Emily Dickensons Because I Could Not Stop For Death.

﻿To what extent does the poet you have studied present death as a state to be feared? Death is a key theme in a number of John Donne?s poems, including ?Death Be Not Proud? and ?This Is My Play?s Last Scene?. I have decided to compare these two poems with Emily Dickenson?s ?Because I Could Not Stop For Death?. From the two Donne poems he releases a mixture of feelings including terror and fear however Donne introduces quite a quantity of Christian images to present death. This could have a lot to do with the multiple times Donne came close to death himself and the pressure and constant fear of death whilst being a Catholic under Jacobean England. Donne?s father also known as John Donne died in 1576, leaving his wife, Elizabeth Heywood, the responsibility of raising his many children. A few months after the death of Donne?s father, his two sisters Mary and Katherine died in 1581. Donne?s uncle William Harrington was tortured on the rack, hanged until not quite dead, then was subjected to disembowelment, this is thought to have had a great effect on John Donne and resulting in him questioning his Catholic faith. Emily Dickinson There are many ways which Donne shows his fear of death, one of which is the way he personifies it making it seem like a feared image that is actually standing next to him. ...read more.

?Death Be Not Proud? ends with a paradox which says, ??One short sleep past, we wake eternally, And Death shall be no more; Death, thou shalt die?? This is a statement of clear religious beliefs. Donne is literally saying that death one day shall actually die. Donne is still personifying death by using capitol letters. The use of alliteration for ?death? and ?die? is quite a deafening and bold sound. From this paradox it is hard to understand whether Donne is underneath quite scared about coming close to death or whether he has overcome his previous fear and by saying that one day death will die is his way of bringing death down to size. ?This Is My Play?s Last Scene? also ends with a paradox which says, ??Impute me righteous, thus purg?d of evil, For thus I leave the world, the flesh, the devil.?? Donne uses a direct quotation at the end of this paradox, ??I leave the world, the flesh, the devil.?? Is a direct quotation from the Holy Baptism which refers to the start of life where sins are forgiven. I think Donne is questioning the afterlife and wondering if he can get forgiven before he moves on. ??Impute me righteous? ? Is Donne questioning God, because he feels like his sins will weigh him down to h**l and therefore result in him not reaching heaven. ...read more.

The poem ?Because I could Not Stop For Death? seems more accepting of death than both Donne?s poems, however Dickinson does portray an instant fear of death when she says ??The dews grew quivering and chill?? stating this temperature change where she suddenly goes cold shows a ripple of fear she has underneath, possibly the realisation that she is approaching death. At the end of the poem Dickinson uses the word ??eternity?? which shows her fear and clinging onto what she always believed in, life after death. Donne has had quite a few near death experiences where he probably experience the sudden temperature change within his body when the realisation of his death because all that more real. In late November and early December 1623 Donne suffered a near-fatal illness, thought to be either typhus or a combination of a cold followed by a period of fever. He earned a reputation as an eloquent preacher and 160 of his sermons have survived, including the famous Death?s Duel sermon delivered at the Palace of Whitehall before King Charles I in February 1631. It is thought that his final illness was stomach cancer, although this has not been proven. Donne died on 31st March 1631. Donne was buried in St Pauls Cathedral where he served as Dean for 10 years, where a memorial statue of him was erected. Donne?s monument survived the 1666 fire, maybe the same way that Donne himself survived h**l? ...read more.