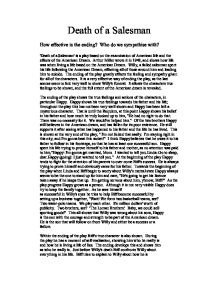 Death of a Salesman - How effective is the ending? Who do we sympathise with?

Death of a Salesman How effective is the ending? Who do we sympathise with? 'Death of a Salesman' is a play based on the examination of American life and the effects of the American Dream. Arthur Miller wrote it in 1948, and shows how life was when living a life based on the American Dream. w***y, a failed salesman spent his life following the American Dream, effecting all of those around him and leading him to suicide. The ending of the play greatly effects the feeling and sympathy given for all of the characters. It is a very effective way of ending the play, as the last scenes seem to link very well to show w***y's funeral. It allows the characters true feelings to be shown, and the full extent of the American dream is revealed. The ending of the play shows the true feelings and actions of the characters, in particular Happy. Happy shows his true feelings towards his father and his life; throughout the play this has not been very well shown and Happy has been left a mysterious character. That is until the Requiem, at this point Happy shows his belief in his father and how much he truly looked up to him, "He had no right to do that. ...read more.

To h**l with those whose fault it is or anything like that." This shows how Biff feels about himself and his father; it is the beginning of the argument and shows great feeling. The very end of the play is shown as w***y's funeral, it is very small and consists of only 5 or 6 people. This is very much different to what w***y expected, he hoped for a large funeral with every one he had ever known or met. These expectations were all due to the falsity of the American Dream and the funeral shows this in many ways. It is a very effective ending as the funeral puts life in prospective for the others and shows their true character. It shows that Biff really cared for his father, as he paid little notice to the amount of people there, he did not need to be impressed with popularity. Where as Happy was concerned about the funeral and still believed in his fathers dream, "I'm gonna show you and everybody else that w***y Loman did not die in vain. He had a good dream. It's the only dream you can have - to come out number - one-man." ...read more.

The very last stage direction that ends the play is the most successful through out, "[BIFF lifts her to her feet and moves out up right with her in his arms. LINDA sobs quietly. BERNARD and CHARLEY come together and follow them, followed by HAPPY. Only the music of the flute is left on the darkening stage as over the house the hard towers of the apartment buildings rise into sharp focus.]" This gives a harsh atmosphere, which adds to the shock of w***y's death. I think this would greatly effect the audience as it creates a very strange atmosphere for them to take in. I think the ending of the play is very successful and really shows the true heart of all of the characters. In a very small space of time I think there is a totally different view of the different family members and even w***y who is no longer alive. I think the sympathy within the ending is very much for Linda, I felt very sorry for her as she is left with no one and her life seems so meaningless now. I think the purpose of the play was to show the effect of society upon one small family that had little success. Miller shows that you can escape society, but only if you know yourself. ...read more.