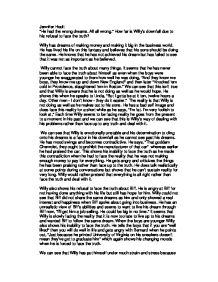 death of a salesman, How far is w***y's downfall due to his refuasl to face the truth

Jennifer Hoult "He had the wrong dreams. All all wrong." How far is w***y's downfall due to his refusal to face the truth? w***y has dreams of making money and making it big in the business world. He has lived his life on this fantasy and believes that his sons should be doing the same. He knows that he has not achieved his dream but has failed to see that it was not as important as he believed. w***y cannot face the truth about many things. It seems that he has never been able to face the truth about himself as even when the boys were younger he exaggerated to them how well he was doing, "And they know me boys, they know me up and down New England" and then later "Knocked 'em cold in Providence, slaughtered 'em in Boston." We can see that this isn't true and that w***y is aware that he is not doing as well as he would hope. He shows this when he speaks to Linda, "But I gotta be at it ten, twelve hours a day. Other men - I don't know - they do it easier." ...read more.

When the boys are younger w***y also shows his inability to face the truth. He tells the boys that if you are "well liked" then you will do well in life and gets angry with Bernard when he points out, "Just because he printed University of Virginia on his sneakers doesn't mean they've got to graduate him" which again shows his changing moods when he is forced to face the truth. We can see that w***y has put himself under much strain and stress because of this idea of what is a great man. He tries to live a lie which causes him to live in a fantasy. This stress contributes to his downfall and makes w***y unable to see what really matters. He wanted to do well for his family, he said "Someday I'll have my own business, and I'll never have to leave home" It is important to w***y that he is "well liked" and he fails to see that it doesn't matter to his family and they will love him no matter what. Linda says "enough to be happy right here right now, Why must everybody conquer the world", which shows that she was happy with what they had. ...read more.

He believes that he should be more respected as he has worked for the firm a long time and he "named him Howard". This is a factor in w***y's downfall as he feels rejected and useless. We can see that w***y has lived in a dream and the dream he had expected too much of him. This seems to have played a large part in his downfall. Another contributing factor to w***y's downfall is Biff as he has not lived up to what he expected and this troubles w***y. There is also the way w***y has been treated by the firm he works for as he expected loyalty and understanding from them but didn't get it. These factors are only a problem because of w***y's dreams and are only factors in his downfall as they are more things that w***y refuses to face the truth about. The whole idea of his dream is a major cause of his downfall as he always striving for more and never able to see that what he has is enough to be happy with. He fails to see that he has everything he really needs. w***y could not live up to his dream and he could not face the truth about this and subsequently he could not face the truth about anything in his life and his downfall is mainly due to this. ...read more.