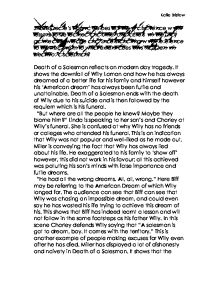 Death of a Salesman - Requiem

Shakespeare's tragic heroes left their audience with lessons to be learned and other characters in the play gained knowledge and understanding with reference to the Requiem to what extent does this happen in Death of a salesman? Death of a Salesman reflects on modern day tragedy. It shows the downfall of w***y Loman and how he has always dreamed of a better life for his family and himself however his 'American dream' has always been futile and unattainable. Death of a Salesman ends with the death of w***y due to his suicide and is then followed by the requiem which is his funeral. "But where are all the people he knew? Maybe they blame him?" Linda is speaking to her son's and Charley at w***y's funeral. She is confused at why w***y has no friends or colleges who attended his funeral. This is an indication that w***y was not popular and well-liked as he made out. Miller is conveying the fact that w***y has always lied about his life. ...read more.

Charley's speech is one of the most memorable passages in the play. It is as if he is still defending w***y, it is a kind of respectful eulogy removing the blame from w***y. "I'm gonna show you that w***y Loman did not die in vain. He had a good dream. It's the only dream you can have - to come out number one man. He fought it out here, and this is where I'm gonna win it for him." Here Happy is clearly displaying that he is truly his father's son. He hasn't listened to a word Biff has said even though he is the only one who seems to be talking sense. There has been a realisation with all of the other characters expect Happy. Therefore, showing he is a lost cause and will probably share the same fate as w***y. This adds to the tragedy as this isn't the end of the Loman's demise. Now he only seems more determined to make his father's dreams come true for himself, which both the audience and Biff know is extremely unlikely as their whole lives have basically been a lie. ...read more.

Miller shows the audience that w***y died as deluded as he lived. The definition of Shakespeare's tragic hero's is that the story leads up to and includes the death of the hero, the hero is of high status, the suffering and calamity are exceptional, also, the heroes are responsible for the catastrophe of their fails. However, in comparison the modern tragic hero, rather than falling calamitously from a high position, begins the story appearing to be an ordinary man. For example w***y Loman. This serves to illustrate Millers belief that all people not just the nobility are affected by materialistic and capitalist values. In my opinion w***y Loman falls into both categories. People could say he is a modern tragic hero but he also does apply to the definition of a Shakespearian tragic hero. A Shakespearian tragic hero may have to be of high status, but, technically w***y Loman was of high status to those close to him like his family. The characters Linda, Biff and Happy thought the world of w***y Loman therefore he was clearly of high status in his own family. ?? ?? ?? ?? Katie Bristow ...read more.