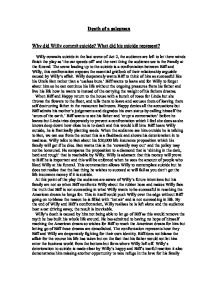 Death of a salesman - Why did w***y commit suicide? What did his suicide represent?

Death of a salesman Why did w***y commit suicide? What did his suicide represent? w***y commits suicide in the last scene of Act 2, the audience are left to let there minds finish the play as 'the car speeds off' and the next thing the audience see is the Family at the funeral. The scene leading up to the suicide is a confrontation between Biff and w***y, this confrontation exposes the essential gridlock of their relationship arguable caused by w***y's affair. w***y desperately wants Biff to think of him as successful like his Uncle Ben rather than a 'useless b*m.' Biff wants to leave and for w***y to forget about him so he can continue his life without the ongoing pressures from his father and live his life how he wants to instead of the carrying the weight of his fathers dreams. When Biff and Happy return to the house with a bunch of roses for Linda but she throws the flowers to the floor, and tells them to leave and accuses them of leaving there self destructing father in the restaurant bathroom. ...read more.

He compares the proposition to a diamond that is 'shining in the dark, hard and rough' that is reachable by w***y. w***y is adamant that this money will prove to Biff he is important and this will be enforced when he sees the amount of people who liked w***y at his funeral. This conversation allows w***y to contemplate suicide but he does not realise that the last thing he wishes to succeed at will fail as you don't get the life insurance money if it is suicide. At this point of the play the audience are aware of w***y's future intentions but his family are not so when Biff confronts w***y about the rubber hose and makes w***y face the truth that Biff is not succeeding in what w***y wants to be successful in reaching the American dream he longs for. This in itself could push w***y over the edge without Biff going on to blame the reason he is filled with 'hot air' and is not succeeding in life. ...read more.

This confusion to recognise emotions and signals from his family marks a climax in his self tortured day. This confusion of Biff's emotion although is wrong persuades w***y he is well liked and enables him to make his final sale in life i.e. his life. w***y's view of his suicide is a way of validating and proving himself at being a salesman and also a successful martyr as he is passing on his American dream and ambition to Biff. Ben's last reference 'the jungle is dark, but full of diamonds' changes w***y's death to symbolise a metamorphical moral struggle. In conclusion w***y's obsession with the American dream to become successful creates the death of him. His death becomes a religious crusade and therefore w***y becomes a Christ like figure and dies to relieve the sins of his sons who have failed in reaching his aims for them. ...read more.