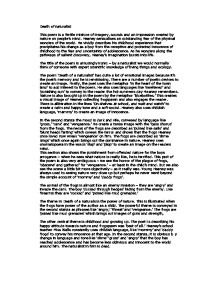 Death of naturalist This poem is a fertile mixture of imagery, sounds and an impression created by nature on people's mind. Heaney sensualises an outstanding fear of the physical wonders of the world. He vividly describes his childhood experience that precipitates his change as a boy from the receptive and protected innocence of childhood to the fear and uncertainty of adolescence. As he wonders along the pathways of salient discovery, Heaney's imagination bursts into life. The title of the poem is amusingly ironic - by a naturalist we would normally think of someone with expert scientific knowledge of living things and ecology. The poem 'Death of a naturalist' has quite a lot of emotional images because it's the poet's memory and he is reminiscing. There are a number of poetic devices to create an image. ...read more.

The frogs are described as 'slime kings' which once again brings out the dominance in nature. Heaney uses onomatopoeia in the words 'slap' and 'plop' to create an image on the readers mind. This section also shows the punishment from offended nature for the boys arrogance - when he sees what nature is really like, he is terrified. This part of the poem is also very ambiguous - we see the horror of the plague of frogs, 'obscene' and gathered' for 'vengeance.' - at least in the child's mind. But we also see the scene a little bit more objectively - as it really was. Young Heaney was always used to seeing nature very close up but perhaps he never went beyond the simple account of 'mommy' and 'daddy frogs'. ...read more.

In the second stanza, it is obvious b y change in language and tone like 'slime' 'gross' and 'angry' that the boy has reached adolescence and has become less oblivious and innocent to the world around him. The naturalist in him is dead. 'Fattening dots burst' shows growth and reproduction' Heaney's school teacher, is hiding the reality of reproduction from the children because they are not ready enough to face and accept the reality of the situation. They are not ready to accept s*x. They are irrational. Puberty makes them feel guilty. In the end young Heaney 'sickened, turned, and ran' which shows that he is not yet grown up. In his poem Heaney uses terms that we would not normally expect in another poem. He presents nature as the opposite of beautiful. Heaney shows how children are very igneous and na�ve to the world around them and perceive the world as pure and wholesome. Heaney also shows the transformation from childhood to adulthood. ...read more.