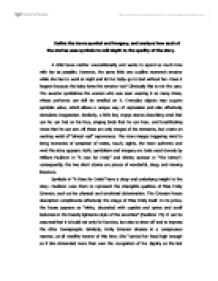 Define the terms symbol and imagery, and analyze how each of the stories uses symbols to add depth to the quality of the story.

Define the terms symbol and imagery, and analyze how each of the stories uses symbols to add depth to the quality of the story. A child loves mother unconditionally and wants to spend as much time with her as possible. However, the same little one cuddles mummy's sweater while she has to work at night and let her baby go to bed without her. Does it happen because the baby loves the sweater too? Obviously this is not the case. The sweater symbolizes the woman who was seen wearing it so many times, whose perfumes can still be smelled on it. Everyday objects may acquire symbolic value, which allows a unique way of expression and also effectively stimulates imagination. Similarly, a little boy enjoys stories describing wind that can he can feel on his face, singing birds that he can hear, and breathtaking views that he can see. All these are only images of his memories, but create an exciting world of "almost real" experiences. The more images triggering mind to bring memories of sensation of testes, touch, sights, the more authentic and vivid the story appears. Both, symbolism and imagery are tools used cleverly by William Faulkner in "A rose for Emily" and Shirley Jackson in "The lottery"; consequently, the two short stories are pieces of wonderful, deep, and moving literature. ...read more.

It can be assumed the cotton wagons and the gasoline pumps are used to symbolize townspeople who were seen by Miss Emily as unimportant and purposeless. This comparison proves that Faulkner's use of symbols in "A rose for Emily" was a extremely effective way of building the depth of the story. While reading "A rose for Emily" the pictures and impressions presented in the story appear easy to imagine thanks to the writer's use of details. Faulkner creates a very horrifying image of death which prevalently occurs throughout the whole story. Five actual deaths discussed or mentioned in passing saturate the reader's imagination with a very strong and distinct icon of this phenomenon. The plot begins with narrator's recollections of Emily's funeral that happens to gather the entire community. "Our whole town went to her funeral" (Faulkner 74) says one of the observators. This simple statement triggers series of images that each reader stores in his/her mind: many sad faces, dark clothes, the silence, fear, and maybe even curiosity, all of them reffer to death. Moreover, the narrator's description of Emily is that of a drown woman: "She looked bloated, like a body long submerged in motionless water, and of that pallid hue" (79). An awful sight of a body that used to be known as Miss Emily is now a photography taken by the talented author. ...read more.

Shirley Jackson paints the lottery scene using comparison of two elements: the villagers' apparition and the appearance of nature. The beginning of the first paragraph informs that "the morning of June 27th was clear and sunny with the fresh warmth of a full summer day; the flowers were blossoming profusely and the grass was richly green" (Jackson 208). Readers' attention focuses on the beautiful impression of colorful flowers, juicy grass, and the warmth and peace of another summer day. Similarly, the people who came to participate in the lottery seem quite happy and careless. The "children tended to gather together quietly" (209). The men spend time "speaking of planting and rain, tractors and taxes" (209) as if they do not suspect what is going to happen next. The people and the nature look to be unified and inseparable. "A rose for Emily" as well as "The Lottery" present an effective way of use of symbol and imagery. Expanded meaning of a particular word or thing creates a new set of correlations. Faulkner, for instance, uses the Grierson house as a substitute for Miss Emily's physical characteristics. On the other hand, imagery provides a channel to readers' active imagination. Jackson's choice of words act as a trigger to reader's mind; the description of the nature provides enough vivid details to actually see the whole picture. ?? ?? ?? ?? 4 ...read more.