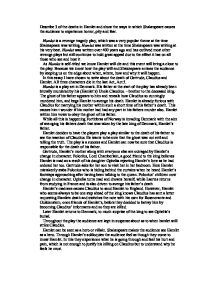 Describe 3 of the deaths in Hamlet and show the ways in which Shakespeare causes the audience to experience horror, pity and fear.

Describe 3 of the deaths in Hamlet and show the ways in which Shakespeare causes the audience to experience horror, pity and fear. Hamlet is a revenge tragedy play, which was a very popular theme at the time Shakespeare was writing. Hamlet was written at the time Shakespeare was writing at his very best. Hamlet was written over 400 years ago and has outlived most other revenge plays but still continues to hold great appeal due to the effect it has on all those who see and hear it As Hamlet is self-titled we know Hamlet will die and this event will bring a close to the play. Because we know how the play will end Shakespeare entices the audience by keeping us on the edge about when, where, how and why it will happen. In this essay I have chosen to write about the death of Gertrude, Claudius and Hamlet. All three characters die in the last Act, Act 5. Hamlet is a play set in Denmark. His father at the start of the play has already been brutally murdered by his (Hamlet's) Uncle Claudius. - brother to the deceased king. ...read more.

Later Hamlet returns to Denmark, to much surprise of the king to see Ophelia's burial. Throughout the play the audience are kept in suspense about as to when hamlet will strike Claudius. Hamlet can be seen as a hero or villain. Shakespeare makes the audience see Hamlet as a hero. Through Hamlet's soliloquies the audience feel as though they come to know Hamlet. In this they experience what he is going through and feel his hurt and pain, which is not enough to justify his killing on Claudius but to understand why he feels he must. Act 5 begins with the burial of Ophelia and shows the first confrontation between Laertes and Hamlet. Here Shakespeare allows the audience to acknowledge that both Laertes and Hamlet are suffering in the same way; although Laertes has lost both a father and sister, as Ophelia's death was a result of her fathers. However, Shakespeare causes the audience to excuse Hamlet's wrong deed and side with him. Scene two from this Act is the last in the play. Claudius falsely welcomes Hamlet home. However, Claudius and Laertes see Hamlets return as a suggestion to all their troubles, to kill Hamlet once and for all. ...read more.

Throughout the play Shakespeare causes the audience to experience horror, pity and fear by making the next stage in the play all the more unpredictable. Just when we think we know what will happen due to what has been revealed to us through conversation and especially soliloquies does Shakespeare prove us wrong by adding an unexpected twist. I think Hamlet has also been such a success because it shows how life in this world is so short and puts fear into us about life in the next. It also shows how one incident can affect so many lives so much. The fact that Hamlet is betrayal within a family causes the audience to feel that little bit more afraid. When the tight unity between families is broken then respect for anyone can hardly be possible, as the ability to trust and love another must be hard. In Shakespeare's Hamlet, Shakespeare deals with ________ . When Hamlet feels as though he can no longer trust his mother, and his friends have betrayed him and his uncle is the cause of all this, he can only turn to madness as this he feels is the situation. 'If you can't beat them, join them'. This is somewhat the situation ...read more.