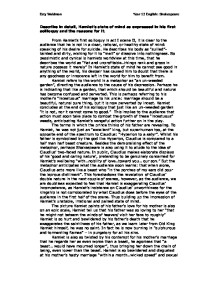 Describe in detail, Hamlet's state of

Describe in detail, Hamlet's state of mind as expressed in his first soliloquy and the reasons for it. From Hamlet's first soliloquy in act I scene II, it is clear to the audience that he is not in a clear, rational, or healthy state of mind: speaking of his desire for suicide. He describes his body as "sullied"- tainted and dirty, wishing for it to "melt" or dissolve into nothingness. So pessimistic and cynical is hamlets worldview at this time, that he describes the world as "flat and unprofitable...things rank and gross in nature possess it merely" In Hamlet's state of mind he cannot see good in anything of the world, his despair has caused him to doubt that there is any goodness or innocence left in the world for him to benefit from. Hamlet refers to the world in a metaphor as "an un-weeded garden", directing the audience to the cause of his depression. Perhaps he is indicating that like a garden, that which should be beautiful and natural has become confused and perverted. ...read more.

his father was so loving to her "that he might not beteem the winds of heaven/ visit her face to roughly" Hamlet is so hurt and bewildered by his father's death that he exaggerates the saintliness of his father, as we learn later from Old King Hamlet himself, he was no saint. In fact he is now burning in "sulphurous and tormenting flames" - in purgatory for all his sins. Hamlet is also so twisted by his contempt for his mother's marriage that he regards her as even worse than a beast, he agonises that "a beast... would have mourned longer", thus bringing her down the chain of being, even lower than the beast. Hamlet is so bewildered and disgusted at his mother's hasty marriage "within a month...wicked speed" and sexual depravity, that in his irrational state of mind he even accuses her tears of being "unrighteous" upon her husband's death, as he cannot understand how she could be truly mourning and missing his father if she had the strength to remarry her husbands own brother within "not two" months. ...read more.

This is effective in bringing the audience to an understanding of Hamlet's confusion, and moral indignation as we then learn how she, in a "beast"-like manner, turned from this distraught mourning, following "my father's body... all tears" to marrying her belated husband's brother with "most wicked speed... but two months dead... to post with such dexterity to incestuous sheets" Through this vibrant and poignant imagery, the audience may begin to understand Hamlet's unstable, confused and extremely pained state of mind, during act I scene II. Therefore, in conclusion, Hamlet's state of mind as expressed in his first soliloquy is clearly unstable, irrational and understandably greatly pained at the loss of his father. It is also clear that he is not only so distraught due to his father's death but also due to his mother's incestuous remarriage. Hamlet's state of mind is portrayed to the audience using punctuation and language, to interrupt the flow of the verse. And by using gruesome, and often pessimistic and cynical imagery such as the "unweeded garden" and "sullied flesh", Shakespeare communicates Hamlet's emotional instability and extremely strong moral indignation to his mother's marriage, comparing her to a "beast". Esty Waldman Year 12 English: Shakespeare ...read more.