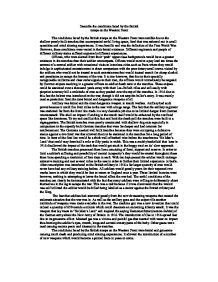 Describe the conditions faced by the Britishtroops on the Western Front

Describe the conditions faced by the British troops on the Western Front The conditions faced by the British troops on the Western Front were terrible due to the shallow poorly built trenches that accompanied awful living space, food that was rationed out in small quantities and mind altering experiences. It was horrific and was the definition of the First World War. However, these conditions were varied in their brutal existence. Different regiments and people of different military status suffered supremely different experiences. Officers, who were elected from their 'posh' upper class backgrounds would have a greater existence in the trenches than their soldier counterparts. Officers would receive a pay load ten times the amount of a normal soldier with occasional visits to luxurious cities such as Paris where they would indulge in sophisticated entertainment in sheer comparison with the poor dreary small towns visited by the soldiers who would not be treated to such entertainment but would instead search for cheap alcohol and prostitutes to escape the horrors of the war. ...read more.

The shell on impact if landing in the trench itself would be enhanced by the confined space like dominoes. To try and conflict this fact and limit the death poll the trenches were built in a zigzag pattern. The British trenches were poorly constructed with shallow dug outs especially in comparison to the expertly built German trenches that were far deeper and had concrete for reinforcement. The Germans needed well built trenches because they were occupying a defensive stance against a two front war that allowed them to be stationed in the trenches for a long period of time. In front of the first line would be a thick wall of barbed wire before the treacherous 'No Man's Land' that could vary from half a mile to fifty yards in width. This was a muddy battlefield that later in 1916 disallowed the impact of the tank that would get stuck in the boggy mud on its' slow approach. ...read more.

The fear that soldiers had stemmed greatly from the new devastating weapons that created the stalemate situation that the war was in. As well as the artillery guns and the sniper rifle another multitude of weapons were made available in the war. The machine gun was a new invention that could unload a quantity of 650 rounds a minute which could desecrate an oncoming infantry attack. It was the weapon that lay waste to 'No Man's Land' and inspired the saying Kannonenfutter (cannon-fodder) of the German army about the New Army of Britain in 1916. The introduction of Gas in 1916 spread fear due to its gruesome effect. Mustard gas was a vicious and painful gas that reacted with water on impact thus burning the soldier's eyes, mouth, lungs and several sweaty parts of the body. Other gases were used causing serious panic and disarray in the trenches. The conditions faced by the British troops on the Western Front were brutal and gruesome causing much death and producing mind altering experiences. It allowed the introduction of a number of new weapons which would become a primal force in years to come. ...read more.