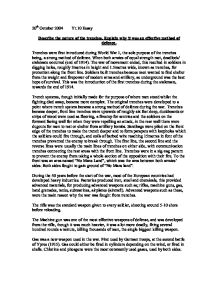 Describe the nature of the trenches. Explain why it was an effective method of defence.

20th October 2004 Yr.10 Essay Describe the nature of the trenches. Explain why it was an effective method of defence. Trenches were first introduced during World War 1, the sole purpose of the trenches being, a strong method of defence. When both armies of equal strength met, deadlock/ stalemate occurred (end of 1914). The war of movement ended, this resulted in soldiers in digging holes, roughly 3metres in height and 1.5metres wide, known as trenches, for protection along the front line. Soldiers built trenches because men wanted to find shelter from the weight and firepower of modern arms and artillery, as underground was the best hope of survival. This was the introduction of the first trenches during the stalemate, towards the end of 1914. Trench systems, though initially made for the purpose of where men stood whilst the fighting died away, became more complex. The original trenches were developed to a point where trench system became a strong method of defence during the war. ...read more.

The rifle was the standard weapon given to every soldier, shooting around 5-10 shots before reloading. The Machine gun was one of the most effective weapons of defense, and was developed from the rifle, though it was much heavier, it was a lot more deadly, firing several hundred rounds a minute, killing thousands of men, the single biggest killing weapon. Gas was a new weapon used in the war. First used by German troops, at the second battle of Ypres (1915). Gas could either be fired in cylinders depending on the wind, or fired in shells. Chlorine and phosgene were the most commonly used gases, used by both sides. Both chlorine and phosgene as worked by suffocating the lung of oxygen. Mustard gas was the worst, it effects; rot the body, blistered skin, the lining of the stomach stripped, though the effects would not be noticeable until after a few hours. ...read more.

Their hopes were to break through with weight of numbers. The trenches first came about by being built by the soldiers fighting in the war, as a defense method. The war was fought from trenches as it was an effective defence method from the new weapons introduced in the First World War. The weapons were; rifles, machine guns, gas, hand grenades, tanks, submarines, airplanes (aircraft), these weapons lead to the first trenches being made, making the trenches an effective method of defence. Tactics of the senior officers lead to many unnecessary deaths, though the trenches protected the men, lack of knowledge about the new weapons lead the senior officers to send their armies "over the top" of the trenches. In my opinion, I think the trenches were an effective method of defence because, due to the trenches system the war resulted in a stalemate, this gave time for the advance of weapons and development of which I think finally won the war. ...read more.