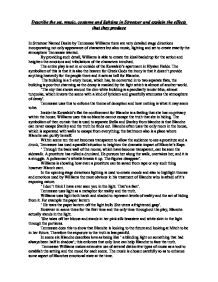 Describe the set, music, costume and lighting in Streetcar and explain the effects that they produce

Describe the set, music, costume and lighting in Streetcar and explain the effects that they produce In Streetcar Named Desire by Tennessee Williams there are very detailed stage directions incorporating not only appearance of characters but also music, lighting and set to create exactly the atmosphere Tennessee wanted. By providing such detail, Williams is able to create the ideal backdrop for the action and heighten the emotions and tribulations of the characters involved. The entire play is set in or outside of the Kowalski's apartment in Elysian Fields. The symbolism of this is that it is also the heaven for Greek Gods the irony is that it doesn't provide anything heavenly for the people there and it acts as h**l for Blanche. The building is a 2-story house, which has, be converted in to two separate flats, the building is poor but charming as the decay is masked by the light which is almost of another world. 'The sky that shows around the dim white building is a peculiarly tender blue, almost turquoise, which invests the scene with a kind of lyricism and gracefully attenuates the atmosphere of decay'. ...read more.

Williams uses light both harsh and shaded to represent levels of reality and the act of hiding from it. For example the paper lantern ' He tears the paper lantern off the light bulb. She utters a frightened gasp'. However in scene three for the first time and the only time throughout the play, Blanche actually stands in the light. 'She takes off her blouse and stands in her pink silk brassiere and white skirt in the light through the portieres. Tennessee does this to show that Blanche is looking to the future and looking at Mitch to be in her future. Therefore the exposure to the truth is less painful. In scene six Blanche describes love as being like ' a blinding light on something that had always been half in shadow'; this enforces that only love can help Blanche to face the truth. Tennessee Williams makes extensive use of several distinctive types of music as a tool to establish the setting and the mood for each scene. The music is chosen carefully so as to enhance some aspect of Blanches emotional state at the time. ...read more.

Stanley however is different he wears clothes that reflect the true person he is. During streetcar we find that Stanley wears the colour red this symbolises a lot of meanings such as animalistic, passionate, bold, arrogant and masculine. Tennessee Williams has done this to give the effect that Blanche is an outsider in New Orleans and form society. Also Stanley has his special occasion pyjamas Williams here shows that Stanley viewed his marriage in the same way as he views other women, s****l objects. Mitch has a different sense of dress to the rest of the 'boys' he dresses smart, as he wants to impress. Williams did this to show that Mitch is looking for the woman of his dreams so he dresses up to attract them. However during scene nine we find that he changes and goes to see Blanche in his work clothes this symbolises disrespect and that he doesn't want anything to do with Blanche anymore due to the things he has found out. In conclusion Tennessee Williams uses set, music, costume and lighting in streetcar to symbolise or give an effect of something. I think they way he has done it is very well suited to the play. ...read more.