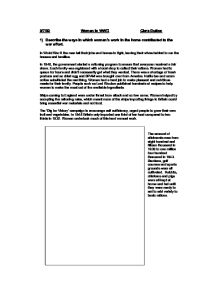 Describe the ways in which women&amp;#146;s work in the home contributed to the war effort.

9/7/02 Women in WWII Clare Dutton 1) Describe the ways in which women's work in the home contributed to the war effort. In World War II the men left their jobs and homes to fight, leaving their wives behind to run the houses and families. In 1940, the government started a rationing program to ensure that everyone received a fair share. Each family was registered with a local shop to collect their rations. Women had to queue for hours and didn't necessarily get what they wanted. There was a shortage of fresh produce and so dried egg and SPAM was brought over from America. Nettle tea and acorn coffee substituted the real thing. Women had a hard job to make pleasant and nutritious meals for their family. People such as Lord Wooton published hundreds of recipes to help women to make the most out of the available ingredients. Ships coming to England were under threat from attack and so few came. Women helped by accepting the rationing rules, which meant more of the ships importing things to Britain could bring essential war materials and not food. The 'Dig for Victory' campaign to encourage self sufficiency, urged people to grow their own fruit and vegetables. In 1945 Britain only imported one third of her food compared to two thirds in 1932. ...read more.

Women could join; Women's Royal Navy Service (WRNS), Women's Auxiliary Air Force (WAAF) or the Auxiliary Territorial Service (ATS). Their jobs were not made easy by the sexist attitudes from men, who even stopped some female pilots from having radios as they feared they would use them to gossip. This made flying very hard and dangerous. Many women in the services still took on the traditional female jobs such as secretaries, cooks and cleaners. The Women's Land Army allowed women to prove that they could handle tough jobs very well. At the start of the war there were five hundred and fifty thousand men working on the land and this number dropped significantly. Eighty thousand women took up working on the land. Despite what men thought and wanted the Land Girls were a success. This is a poster encouraging people to join the Women's Land Army. It makes it look very cheerful but in reality it was very hard and badly paid. The Women's Voluntary Service dealt with some very dangerous situations such as unexploded bombs and rescuing people from wrecked buildings. They helped look after the people made homeless from the air raids. Married women could be conscripted after 1943, which was very hard for them. Many had to put their children into child care because the hours were long. ...read more.

She was then interrogated and tortured and sent to a concentration camp where she stayed in the dark damp conditions of solitary confinement. She refused to give information to the Nazis and was sentenced to death. Luckily she escaped death as it was thought that she was related to Winston Churchill and at that point Britain and her allies were winning the war. The Nazis thought it would look good if they saved her. Other women to be awarded the cross were Corporal Daphne Pearson of the WAAF and Violette Szabo who was also a spy. When spies were captured they did not give out any information even when under immense torture and pressure. Some gave their lives for their country. If the spies had not been strong enough the enemy could have found out information that would be very dangerous in their hands. This propaganda poster is telling people to be careful what they say because they could be talking to a spy like the men are in the poster. Another reason why men were portrayed to have the more important role is that most films, novels and books are produced by men who would understate the role of women. I researched this and found that only two out of a random selection of fifty books about the War were written by women. The men, having more of a voice in society, described how hard they had fought but because women were still dominated by men, they could not speak out and their contribution was not recognised. ...read more.