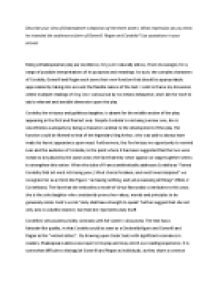 Describe your view of Shakespeares depiction of the three sisters. What impression do you think he intended the audience to form of Gonerill, Regan and Cordelia? Use quotations in your answer.

﻿Describe your view of Shakespeare?s depiction of the three sisters. What impression do you think he intended the audience to form of Gonerill, Regan and Cordelia? Use quotations in your answer. Being a Shakespearian play par excellence, King Lear naturally allows, if not encourages, for a range of possible interpretations of its purposes and meanings. As such, the complex characters of Cordelia, Gonerill and Regan each serve their own function that should be appropriately appreciated by taking into account the flexible nature of the text. I wish to frame my discussion within multiple readings of King Lear, various but by no means exhaustive, and I aim for each to add a relevant and sensible dimension upon the play. Cordelia, the virtuous and guileless daughter, is absent for the middle section of the play, appearing in the first and final act only. Despite Cordelia?s role being a minor one, she is nevertheless a ubiquity by being a character cardinal to the development of the play. Her function could be likened to that of the legendary King Arthur, who was said to always have made his heroic appearance upon need. Furthermore, the Fool misses no opportunity to remind Lear and the audience of Cordelia, to the point where it has been suggested that the two were meant to be played by the same actor; the fact that they never appear on stage together seems to strengthen this notion. ...read more.

After Lear goes to live with Gonerill, we witness events that may point to Gonerill being the just one; in formal, convoluted language, she asks her father to reduce his number of ?disordered, so debauched and bold? knights and therefore restore the kingdom from its current ?riotous inn? state to a ?graced palace?. According to Hunter, Gonerill?s complex rhetoric conveys ?an impression of cold venom?, but at this point one could safely argue that Gonerill is expressing legitimate grief, and more so, is being tactful and diplomatic in doing it. Lear?s knights indeed may ?grow riotous?, disturbing the peace and harassing her female servants, but as there is no actual evidence present in the play, one can only speculate on the possibility. Peter Brook so has chosen to interpret the play; in his theatrical version, he presented Lear and his knights as unruly. However, a brief scene with one of the knights behaving appropriately chivalrous suggests that Gonerill may be wrong, or, as Kittredge concluded, may be exaggerating in demonizing them. Upon Lear?s arrival at Gloucester?s castle, he finds with dismay that Regan has sided with Gonerill. His poignant display of an imploring father contrasts with Regan?s dignified and aloof attitude. From seeing Regan only being startled into action as soon as Gonerill makes her appearance, one can hypothesize that it is Gonerill who is the more imperious of the two. ...read more.

Moreover, it is possible to read her response as having been triggered by her resentment of her father?s gullibility to her sisters? false words of love. In this way, she could be motivated by her frustration at her father, or anger at her sisters? falsehood, or both. The sonority of marriage vows in Cordelia?s ?Obey you, love you, and most honour you? and the absence of a maternal figure led some to believe that she is the surrogate wife of the King. Feminists have disputed that Lear?s kingdom is a patriarchal kingdom in need of a female figure. The Fool, in an original union of the serious and the comic, alludes to the inversion of the Natural Order of Being by drawing his king?s attention to the way in which ?thou mad?st thy daughters thy mothers?. In another one of his epigrams (?the cart draws the horse?), he suggests the incongruity of the filial power governing over the parental one. Briefly, the brilliance of King Lear is supported by its ability to surprise and engage readers personally, for it shows them enough respect as to let them render their own views about distinct aspects of the play, such as the motives of the two villainous sisters, the explanation for Cordelia?s behaviour, Cordelia?s symbolic function in the play and so on. I have merely attempted to explore a limited number of interpretations in order to elucidate some key concepts that the play concerns itself with. ...read more.