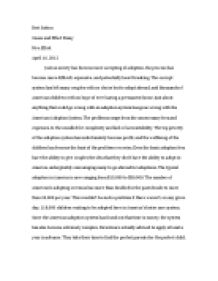 Descriptive essay. Just about anything that could go wrong with an adoption system has gone wrong with the American Adoption System.

﻿Bret Sutton Cause and Effect Essay Mrs. Ellick April 16, 2012 Just as society has become more accepting of adoption, the process has become more difficult, expensive, and potentially heart breaking. The corrupt system has left many couples with no choice but to adopt abroad, and thousands of American children with no hope of ever having a permanent home. Just about anything that could go wrong with an adoption system has gone wrong with the American Adoption System. The problems range from the unnecessary fees and expenses, to the uncalled for complexity and lack of accountability. The top priority of the adoption system has unfortunately become profit, and the wellbeing of the children has become the least of the profiteers worries. ...read more.

Since the American adoption system has found out that time is money, the system has also become extremely complex. Parents are actually advised to apply at least a year in advance. They take their time to find the perfect parents for the perfect child, but this match does not exist. The only reality in this search is the fact that it takes time, and once again in this business time is money. If the adoption system could put its greed behind the needs of the children on its priority list, more of the available children could be placed in permanent homes, which is the ultimate goal. Unfortunately though, money still reins as the most important factor. ...read more.

When couples hear of stories like these, and find out how much money they will spend and how little accountability they will receive in order to adopt in America, the idea of adoption abroad begins to sound like the best option. The more families that decide to adopt from countries such as China and Guatemala, the more children in America that are left without a chance of a permanent home. There is no excuse for the number of youth that America?s adoption system has denied a family. When there are children in America to be adopted, families should not be forced to adopt abroad. If the American adoption system was less complicated, less people would have to go abroad to adopt, and therefore less American children would remain in the foster care system. ...read more.