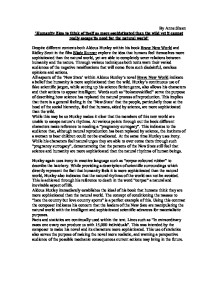 By Anne Sheen 'Humanity likes to think of itself as more sophisticated than the wild yet it cannot really escape its need for the natural world' Despite different contexts both Aldous Huxley within his book Brave New World and Ridley Scott in the film Blade Runner explore the idea that humans feel themselves more sophisticated than the natural world, yet are able to completely sever relations between humanity and the nature. Through various techniques both texts warn their varied audiences of the negative ramifications that will come from such disdainful, careless opinions and actions. All aspects of the 'New State' within Aldous Huxley's novel Brave New World indicate a belief that humanity is more sophisticated than the wild. Huxley's continuous use of fake scientific jargon, while setting up his science fiction genre, also allows his characters and their actions to appear intelligent. Words such as "bokanovskified" serve the purpose of describing how science has replaced the natural process of reproduction. This implies that there is a general feeling in the 'New State' that the people, particularly those at the head of the social hierarchy, feel that humans, aided by science, are more sophisticated than the wild. While this may be so Huxley makes it clear that the members of this new world are unable to escape nature's rhythms. ...read more.

To indicate the ultimate fact that humans can not really be human without nature Huxley uses juxtaposition. While Lenina ad the other members of the New State use soma to escape discomfort and pain John the savage is able to "time and death and god", elements which a 1930's and contemporary audience would feel marked true sophistication. Juxtaposition is also seen between the characters Mustapha Mond and John the savage. As afore mentioned John realises the integral link between identity, nature and god. When confronted with this opinion Mond merely replies "god is not compatible with machinery and scientific medicine and universal happiness". The society of Brave New World is ultimately a distopia disguised as a utopia. While at a fist glance the New Sate shows signs of scientific advancement and supposedly universal happiness it quickly becomes evident that the New Sate considers itself more sophisticated than the natural world. However, it is also clear that no matter how far humanity appears to move from the natural rhythms of life they are ultimately unavoidable. Huxley was able to express this issue through his inversion of 1930's values. While completely removing the mother role women are traditionally required to fulfill he left only the position of w***e. New Sate women are expected to be promiscuous, god has been replaced with company manager "Ford" and emotions are no longer necessary. ...read more.

This also serves the purpose of presenting his contextual audience of comparing the sophisticated free thinking audience to the prospective future of conformity and destruction. Again expressing the sophistication nature brings with humanity and creation Scott uses inter-textuality. Providing quotes from poets such as William Blake with lines "Fiery the Angels rose" Scott represents the sophisticated, creative freedom given up for science and consumerism in the future. A highly important aspect of Blade Runner is Scott's fusion of the science fiction and film noire genre. Flying cars at the beginning of the film establish the science fiction genre. As the film progresses the audience is presented with a voight-kampft test. Dark lighting, a smoky, shadowy room with a low swinging fan and a jaded detective institute the film noire aspect of the plot. This plays the purpose of indicating a further isolation from the natural world. Such controlled environments provide examples of humanities belief that it is more sophisticated and indeed more powerful than the wild. Despite being written some fifty years apart both Brave New World By Aldous Huxley and Blade Runner Directed by Ridley Scott present the same message. Both texts argue that with advancing technology humanity feels itself more sophisticated and more powerful than the natural rhythms of the world. However, at the same time aspects represented in each text point out that Humanity can never be completely isolated from nature. ...read more.