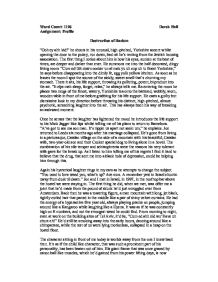 Word Count: 1196 Derek Hall Assignment: Profile Destruction of r****m "Ooh ey ahh kid!" he shouts in his unusual, high-pitched, Yorkshire accent whilst opening the door to the pokey, run down, bed-sit he's renting from the Jewish housing association. The first thing I notice about him is how his eyes, sunken at the best of times, are deeper and darker than ever. He summons me into the half decorated, dingy living room. "c*m ed! Sit down cocker un al mek yu uh cup uh tu finest Yorkshire," he says before disappearing into the dimly lit, egg yolk yellow kitchen. As soon as he leaves the room I spot the source of the sickly, sweet smell that's churning my stomach. There it sits, his life support, throwing its polluting, potent, bi product into the air. "It elps meh sleep, forget, relax," he always tells me. Re-entering the room he places two mugs of the finest, watery, Yorkshire tea onto the battered, wobbly, worn, wooden table in front of me before grabbing for his life support. He casts a guilty but dismissive look in my direction before throwing his distinct, high-pitched, almost psychotic, screeching laughter into the air. ...read more.

It was as if he was constantly high on E numbers, and not the strongest weed he could find. From morning to night, even at work on the building sites of Tel Aviv, it'd be, "c*m ed ahh kid wu'll ave uh chunt eh!" He'd still be smoking away into the early hours, dancing around like a chimpanzee, while the rest of us were lying motionless, collapsed in a heap on the hostel floor. The character sitting in front of me today is worlds away from the one I knew back then. It's as if the child like character, that was such a prominent part of his personality, has been beaten out of him. His giant frame that was once graced by canon ball like muscles, which he'd gained from his power lifting days, is now supporting sagging fat and a perfectly moulded beer belly. The velvet curtains have been replaced by straw like, short, bed hair that sits on his head like road kill. It's easy to see the effects of the deep, dense forest of depression, he's so evidently lost in, in the heavy, wrinkled bags that weigh down his raw eyelids. ...read more.

As they fell further and further into the filthy, rat infested, underground world of crime and drugs, the crimes became more adventurous and more horrific. The comedown came with an attempt at armed robbery that resulted in a six-year prison sentence for Jon. "Am glad ah got out u ear when a did man. Them lots still doin same s**t." Jon explains in the Jamaican/Yorkshire accent he always adopts when he's heavily stoned. He left jail a reformed character, at first setting up his own snowboard business in Edinburgh before setting off on his travels. He nearly slipped back into the intense drug race he thought he'd left behind when he settled in Amsterdam for a year but luckily he escaped and travelled on to Italy, Greece and then to what he calls his homeland, Israel. While Jon was successful in shaking off the criminal side of his life and the class A drug abuse, he doesn't seem to be able to flush out the two main characters, his violent temper and weed addiction, that have played such a prominent role in the drama that has been his life since those defining days of racial abuse that seem to have left everlasting scars. ...read more.