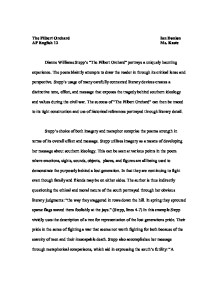 The Filbert Orchard Ian Donlon AP English 12 Ms. Kaste Dianne Williams Stepp's "The Filbert Orchard" portrays a uniquely haunting experience. The poem blaintly attempts to draw the reader in through its critical lense and perspective. Stepp's usage of many carefully connected literary devices creates a distinctive tone, effect, and message that exposes the tragedy behind southern ideology and values during the civil war. The success of "The Filbert Orchard" can then be traced to its tight construction and use of historical references portrayed through literary detail. Stepp's choice of both imagery and metaphor comprise the poems strength in terms of its overall effect and message. Stepp utilizes imagery as a means of developing her message about southern ideology. This can be seen at various points in the poem where emotions, sights, sounds, objects, places, and figures are all being used to demonstrate the purposely behind a lost generation. ...read more.

The specific diction and rhythm found in the "The Filbert Orchard" heightens the southern messages and values in the text as well as delivers a powerful effect for the reader. The poem's literary detail can be seen in its diction, which aids in the establishment of Stepp's dark imagery. Early on the usage of alliteration with "gnarled limbs grizzled" helps paint a gloomy picture in combining images of sight, smell, ugliness, and people. "Moles at their feet carved generations of mansions." (Stepp, lines 7-9) Another essential instance of diction is the usage of "Moles" in contrast to mansions. It could have been chosen for symbolizing the average slave's role as well as the relationship shared by the master and the slave. It can also be viewed as slaves were merely property for an economic goal and did not warrant emotions to that of family if being compared to a "Mole". ...read more.

The bold statements displayed in the ending mark a distinct rhythmic change. In that before the closing series of dialogues the poem is merely ideological and crafted similar to that of a story. The ending changes that perspective and shifts the major themes of loss and disullisionment towards a more local individual level The close attention given to literary elements ultimately enables "The Filbert Orchard" to achieve an extreme level of insight into the southern identity and culture during the civil war. Through its exploration of southern values translated into a vivid storyline the reader is blown away by its short profound thematic integration. The poem is aided by its progressive literal development from appealing to the general society to the localized individual. The journey becomes compounded with introspection because of its ornate literary devices. PS MS KASTE: Did you choose this poem because of your interest in Faulkner and its relatable themes? What is your connection or fascination with literature about the south? ...read more.