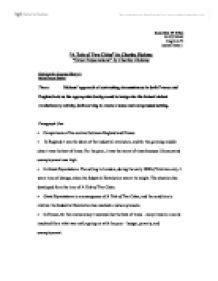 Dickens' approach of contrasting circumstances in both France and England acts as the appropriate background to invigorate the factual violent revolutionary activity, both serving to create a tense and unrepressed setting.

Soon Shu Yi Trina 0107C39342 Eng OA-P3 Journal Entry 1 "A Tale of Two Cities" by Charles Dickens "Great Expectations" by Charles Dickens Outline for Journal Entry 1 Main Focus: Setting Thesis: Dickens' approach of contrasting circumstances in both France and England acts as the appropriate background to invigorate the factual violent revolutionary activity, both serving to create a tense and unrepressed setting. Paragraph One * Comparisons of the contrast between England and France * In England it was the dawn of the industrial revolution, and for the growing middle class it was the best of times. For the poor, it was the worst of times because illiteracy and unemployment was high. * In Great Expectations: The setting in London, during the early 1800s (Victorian era), it was a time of change, when the Industrial Revolution was at its height. The situation has developed from the time of A Tale of Two Cities. * Great Expectations is a consequence of A Tale of Two Cities, and the condition is relative: the Industrial Revolution has reached a mature pinnacle. * In France, for the aristocrcracy it seemed like the best of times - many lived in a world insulated from what was really going on with the poor - hunger, poverty, and unemployment. ...read more.

For the poor, it was the worst of times because illiteracy and unemployment was high. (The situation here can be compared to that in Great Expectations, which Dickens wrote after A Tale of Two Cities, where the Industrial Revolution has reached a highly matured pinnacle.) In France, inflation is out of control and an oppressive social system results in unendurable and severe injustices being committed against average citizens. The harsh justice system, run by the aristocrats, is also compared to England's lenient one, while both countries' concepts of spirituality are also questioned. "It was the best of times, it was the worst of times, it was the age of wisdom, it was the age of foolishness, it was the spring of hope, it was the winter of despair, we had everything before us, and we had nothing before us..." (3) While the English and French sovereigns insensitively ignore the turmoil and desolation ubiquitous in their countries, the populaces of the meager folk secretly, but steadily, move to a tragic elucidation. "The time was to come, when that wine too, would be spilled on the red stones, and when the stain of it would be red upon many there..." (25) A street in the Parisian suburb of Saint Antoine is the scene of chaos as a crowd gathers in front of a wine shop to scoop up from pools of wine spilled from a broken cask. ...read more.

Though the prospect of a peasant rebellion due to hunger and poverty is quite nonexistent, the mutinous rising of today concerns another form of hunger, the hunger of today's youth, which is left malcontented. Materialism and the ache for financial security has made this generation extremely product-orientated. Increasing s****l curiosity and the need for education is not unconditionally fulfilled, as our conservative culture does not cultivate with economical development. The setting creates an atmosphere, brewing with signs of a revolt against the ruling powers. The divergence between the underprivileged and the affluent is so great that one cannot feel the other. It is during such a revelation of the ignorance of the prosperous, that we too, question ourselves. Are the poor ever in the minds of the people savoring a meal that could provide a family for a month? Are the deprived in the minds of the people who throw money on expensive products that are worth only an eighth of its price? This is now a world of hypocrisy, where deliberate ignorance prevails. In A Tale of Two Cities, the setting is used just to convey these exact same views, but from the viewpoint of the victims. And thus, in conclusion, Dickens' rendering of the backdrop and distinctions between the two countries and the social classes, sustains the ominous rebellion that is brewing, while bringing out each character and the role they execute in bringing out A Tale of Two Cities. 2 ...read more.