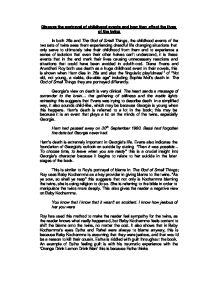 Discuss the portrayal of childhood events and how they affect the lives of the twins In both 26a and The God of Small Things, the childhood events of the two sets of twins sees them experiencing dreadful life changing situations that only serve to ultimately take their childhood from them and to experience a sense of isolation that even their other halves can't understand, it is these events that in the end mark their lives causing unnecessary reactions and situations that could have been avoided in adulthood. Diana Evans and Arundhati Roy both use death as a huge childhood event in their novels, this is shown when Ham dies in 26a and also the 'linguistic playfulness'i of "Not old, not young, a viable, die-able age" including Sophie Mol's death in The God of Small Things they are portrayed differently. Georgia's view on death is very clinical The heart sends a message of surrender to the brain... the gathering of stillness and the inside lights retreating this suggests that Evans was trying to describe death in a simplified way, it also sounds child-like, which may be because Georgia is young when this happens. Ham's death is referred to a lot in the book; this may be because it is an event that plays a lot on the minds of the twins, especially Georgia. Ham had passed away on 30th September 1980. ...read more.

The way they are compared relates to Bessi's feeling of trying to be her own person, whereas Georgia wants to stay as unison. Arundhati Roy uses Ammu and Chacko as a way to implement 'love laws'. This is what the twins believe to be the rules of how much you should love people and why. Ammu said 'When you hurt people, they begin to love you less, that's what careless words do, they make people love you a little less Roy has used this use of 'playful child-centered language to represent the cruelty of the adult world' iito convey the twins struggle for affection from their mother and how they are manipulated into believing they need to work for their mother's love, and that its not already there. This is backed up by when Rahel asks Chacko "Is it necessary that people HAVE to love their own children Most in the World" this signifies that Rahel desperately wants Ammu to love her, and if the love laws apply to her and also asking if Chacko will love Sophie Mol more. This is also a very child like quote, but also poses an important question that you do not expect to come out of a child's mouth. Georgia encounters Sedrick manipulating her to do cartwheels. ...read more.

This could also relate to their personalities, this is because they are described as "two-ness in one-ness" one is missing, and then their personality is a little less. This is similar in The God of Small Things being a young boy taken away from his sister; being abandoned by his mother and essentially given away made him feel worthless and unloved and alone, "Estha alone" the relationship between Rahel and Estha is very strong, this is backed up by "Take mine!' Estha said quickly, not wanting Rahel to go near the man" just after Estha is abused by orangedrink lemondrink man. This is crucial because it seems as if Estha is protecting Rahel from making mistakes he has previously made. But when they are separated the twin's relationship diminishes. But when Estha is re-returned their relationship is re-established as they "fit together like spoons" this also relates to the resolution they share. In conclusion Roy and Evans use death and s****l abuse as prime tribulations that change their characters lives. These are portrayed through child-like narrative contrasted to deep, and shocking events. The way the evil abusers are described makes the reader more connected to the characters involved. The fact that these events happen to the twins when they are so young, the reader can tell that the importance of the event doesn't sink in, and so through their lives manifests into different ways of dealing with pain. ...read more.