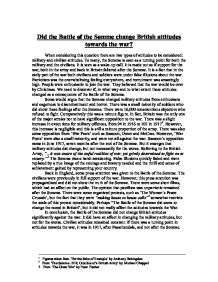 Did the Battle of the Somme change British attitudes towards the war?

Did the Battle of the Somme change British attitudes towards the war? When considering this question there are two types of attitudes to be considered: military and civilian attitudes. To many, the Somme is seen as a turning point for both the military and the civilians. It is seen as a wake-up call. It is made out as if support for the war, both in the army and back in Britain faltered after the Somme. It is a fact that in the early part of the war both civilians and soldiers were under false illusions about the war. Patriotism was the overwhelming feeling everywhere, and recruitment was amazingly high. People were enthusiastic to join the war. ...read more.

There was a slight increase in executions for military offences, from 94 in 1916 to 102 in 19171. However, this increase is negligible and this is still a minute proportion of the army. There was also some opposition from 'War Poets' such as Sassoon, Owen and McCrae. However, 'War Poets' were also a small minority, and were not all against the war. Sassoon's opposition came in June 1917, seven months after the end of the Somme. But it emerges that military attitudes did change, but not necessarily for the worse. Referring to the British Army, "...it was aware of the awful realities of war, yet grimly determined to fight on to victory."2 The Somme was a harsh awakening. ...read more.