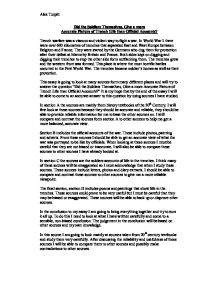 Did the Soldiers Themselves, Give a more Accurate Picture of Trench Life than Official Accounts?

Did the Soldiers Themselves, Give a more Accurate Picture of Trench Life than Official Accounts? Trench warfare was a viscous and violent way to fight a war. In World War 1 there were over 600 kilometres of trenches that separated East and West Europe between Belgium and France. They were started by the Germans who dug them for protection after their defeat at Marne by Britain and France. Both sides kept on digging and digging their trenches to stop the other side form outflanking them. The trenches grew and the western front was formed. This place is where the most horrific battles occurred in the First World War. The trenches became soldier's homes as well as their protection. This essay is going to look at many sources form many different places and will try to answer the question "Did the Soldiers Themselves, Give a more Accurate Picture of Trench Life than Official Accounts?" It is my hope that by the end of the essay I will be able to come to an accurate answer to this question by using sources I have studied. In section A the sources are mainly from history textbooks of the 20th Century. I will first look at these sources because they should be accurate and reliable, they should be able to provide reliable information for me to base the other sources on. I will compare and contrast the sources form section A to other sources to help me get a more balanced, accurate view. Section B includes the official accounts of the war. These include photos, painting and adverts. From these sources I should be able to get an accurate view of what the war was portrayed to be like by officials. When looking at these sources I must be careful that they are not biased or inaccurate. I will also be able to compare these sources to other sources I have already looked at. ...read more.

In the war the government used many techniques to try to enlist new soldiers. A source, which shows one of the methods used, is source B5. It is an advertisement in 'The Times' on April 15, 1915. This source claims it is an extract of a letter from the trenches but I think this is brought into serious question. In my opinion it is really a piece of propaganda used by the government to get more soldiers for the war. The source contains lots of information that gives me this idea. It uses techniques that I know the government used, these include using words like 'I' and 'We'. This brings the reader into the advert and aims it directly at them. Also, the source includes jingoism, which is likely to stir up hatred of the Germans and persuade people to recruit more. I think the fact that the source claims the soldiers are all 'fit as fiddles' also implies that it is propaganda because this is unlikely to be entirely true. The source is useful in showing us the ways the government could make people see what they wanted them to see. From looking at it now we know that it is extremely likely to be propaganda but people reading it at the time might have believed it. Because it is primary evidence I know that it was around at the time of the event that makes it even more reliable as we know it was used. The source could be less useful because we do not know how people reacted to the advert, we don't know whether they responded to it in the desired way or not. I think it also less reliable as we do not know how much the government had to do with this source. Maybe it was a real letter that they changed or they could have made it up completely. ...read more.

The sources in section D all seem to portray the same image. They say that life in the trenches was bad but we still have to take into consideration that some of the facts might have been exaggerated or made to sound more extreme than they actually were. Because of this all the sources in section D might hold false information. However, I think they are still useful in showing us how the soldiers really felt about the war. In conclusion to this essay I have to take many points into consideration. Firstly, every source might include false information in order to do its purpose. This happens less in textbook sources because they are taken form many primary sources and try to give a balanced accurate view. Sources that are written by the government seem to give the impression that life in the trenches were not as bad as the soldiers themselves made out. This is because the government wants people to think that they looked after the soldiers in the war when they might not have as well as they would make out. The soldier's accounts seem to be very graphic and true but we must take into consideration that they might be trying to glorify the events they experienced in the war, this is because they would like to be seen as big heroes so they could receive the gratitude they probably deserved. Even so, I think much of the facts in these sources are still true because the soldiers were actually there and they would know what happened in the trenches more than anyone else. Overall I think that in order to get a truthful image of life in the trenches we must look at all available sources. These include soldier's accounts as well as official accounts and poems and paintings. If any sources seem to be more accurate than others I think the soldiers accounts would be more accurate because they were there and would understand exactly what happened in the war. Alex Turpitt ...read more.