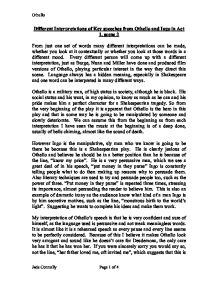 Different Interpretations of Key speeches from Othello and Iago in Act 1, scene 3

Different Interpretations of Key speeches from Othello and Iago in Act 1, scene 3 From just one set of words many different interpretations can be made, whether you look at it contextually or whether you look at those words in a different mood. Every different person will come up with a different interpretation, just as Burge, Nunn and Miller have done and produced film versions of Othello, playing particular interest in the way they direct this scene. Language always has a hidden meaning, especially in Shakespeare and one word can be interpreted in many different ways. Othello is a military man, of high status in society, although he is black. His social status and his want, in my opinion, to know as much as he can and his pride makes him a perfect character for a Shakespearian tragedy. So from the very beginning of the play it is apparent that Othello is the hero in this play and that in some way he is going to be manipulated by someone and slowly deteriorate. We can assume this from the beginning as from each interpretation I have seen the music at the beginning is of a deep done, usually of bells chiming, almost like the sound of death. ...read more.

His speech is controlled, he shows no emotion and he laughs occasionally. I believe this is to show how arrogant Othello is and how he appears to not care at all for Desdemona, as he is not trying in any way to please Brabantio, he laughs as him! Also symbolically he looks up when talking about battles he has fought, almost as if he has a link with the heavens because he has done this, and the line "hills whose heads touch heaven". The description of the mountain is personified possibly to mean that this is a description of him, again showing how much power he has as a mountain is a breathtaking view! Burge here has also made Othello look more important by making Brabantio and the senators look stupid because there is a sense of irony from Othello when witchcraft is mentioned, he laughs! This undermines Brabantio and shows clearly the strong mind of Othello at this point in the play. Burge shows Iago as overpowering as he has a very loud tone of voice, he is very persuasive. The camera angle used is close up on his carefully showing his facial expressions and his sly smile which is almost permanently on his face. ...read more.

Iago has a cockney accent making up perhaps for the fact that he is seen to be more equal to Othello, the cockney accent suggests, especially when in contrast to Roderigo, that he has less social status. This is a different way of showing that Iago is of less importance to Othello. There is a lot of emphasis on the questions he asks people, such as, "Thou art sure of me?" This question shows just how persuasive Iago can be. This a technique used to manipulating people. The way that Miller has Iago laugh in an evil way when he talks alone about Roderigo is a good way of showing how Iago is a darker character in the play. He doesn't care how he hurts the more he just wants to. In conclusion all of these interpretations use different dramatic techniques to convey a meaning, which is the difference between the characters of Othello and Iago. Each director plays each character differently and therefore shows a different interpretation to the statuses of these men in the play. All the techniques used are for film use and therefore may be harder to do if acted on stage, but through the use of emphasis on key language it is also possible to convey different meanings using this technique. Othello Jade Connolly Page 1 of 4 ...read more.

There are some interesting points being made about directors' choices in this essay; however the analysis needs to be more of a comparison than a one by one analysis. Linking analysis by considering similarities and differences will enable a more in depth analysis.