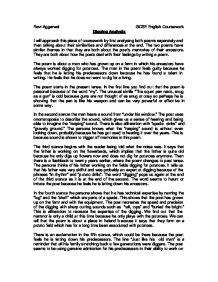 Ravi Aggarwal GCSE English Coursework Digging Analysis I will approach this piece of coursework by first analysing both poems separately and then talking about their similarities and differences at the end. The two poems have similar themes in that they are both about the poet's memories of their ancestors. They are both about how the poets deal with their feelings by writing a poem. The poem is about a man who has grown up on a farm in which his ancestors have always worked digging for potatoes. The man in the poem feels guilty because he feels that he is letting his predecessors down because he has found a talent in writing. He feels that he does not want to dig for a living. The poem starts in the present tense. In the first line you find out that the poem is personal because of the word "my". The unusual simile "The squat pen rests, snug as a gun" is odd because guns are not thought of as snug or cosy so perhaps he is showing that the pen is like his weapon and can be very powerful or effective in some way. In the second stanza the man hears a sound from "under his window." The poet uses onomatopoeia to describe the sound, which gives us a sense of hearing and being able to imagine the "rasping" sound. There is also alliteration with "spade sinks" and "gravely ground." The persona knows what the "rasping" sound is without even looking down, probably because he has got used to hearing it over the years. This is because sound is shown to trigger off memories in this poem. The third stanza begins with the reader being told what the noise was. It says that the father is working on the flowerbeds, which implies that the father is quite old because he only digs up flowers now and does not dig for potatoes anymore. ...read more.

The poem starts unusually because the title of the poem seems to be part of the first line and you read straight from the title onto the first line. The title is in the past tense which implies that 'he' is probably dead now and that the poem is about memories. The first line has two colours in it, "brown" and "green". These two colours are the colours of the countryside. They are describing the man so it could be saying that he is part of the landscape with the colours. The man could be brown because he could be tanned from being outside all the time or maybe because of his age and that he is getting on. His "green thumb" is like a metaphor when you have green fingers you are interested in gardening. In the second line the poet is rekindling memories of this old man mainly by remembering the sounds like "screak", which is very similar to Digging. This unusual word is probably a portmanteau and probably a mixture of screech and creak to describe the sound of his spade. There use of alliteration "chug, choke" describes to us the sound of the setting of the poem which we can guess to be an industrial setting because of the sounds. It describes the sound of the fertilizer cart as a "high madrigal wheeze" which are old Tudor songs, which were made up and were played with lots of notes together. You can tell that the poet is a child at this point because he is up in the tree looking down on the old man. The word "dumb" is a contrast between the noise of the rest of the stanza and dumb means silent because the man spoke very little. The old man is probably an old relative of the poet because it says that the poet could hear the old man "all of my childhood long." ...read more.

He Was is about the poet trying to remember and understand someone who is now dead but who used to be very close to the poet when he was a child. There are also some similarities in themes because both poets feel guilty and are trying to heal themselves through writing the poem like therapy. Digging is set in Ireland, which is a much poorer country than the USA where He Was is set. The work in Ireland is much harder and is very physical. This is a stark contrast to the USA, which has very fertile ground with an ideal climate to grow crops. They also have machines so it is not as hard working on the fields. This difference in the settings also matches the difference in the language of the two. Digging has more straightforward and plain language than He Was, which has richer language with more metaphors and imagery. There are also several similarities between the two poems. They are both remembering agricultural family members who were both old men. They are retrospective in that they both look back to the past and think about their memories of the two old men. Both poets seem to want to belong to their respective family with Heaney feeling left out because he does not dig potatoes and Wilbur feeling guilty that he did not once try to engage in conversation with the old man. Both poems use onomatopoeia and alliteration to great effect describing the sounds and smells which trigger the memories. They are both personal and about the poets own lives so they are autobiographical. I prefer the Heaney poem because the poet is trying to make you think about your own life and whether you have problems like this in your life like not living up to your parents' expectations. Heaney gets you to think about what you want to do next in your life so it is a good poem for young people who still have the rest of their lives ahead of them. ...read more.