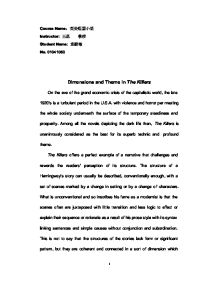 Dimensions and Theme in The Killers.

Course Name:?????? Instructor: ?? ?? Student Name: ??? No. 01041083 Dimensions and Theme in The Killers On the eve of the grand economic crisis of the capitalistic world, the late 1920's is a turbulent period in the U.S.A. with violence and horror permeating the whole society underneath the surface of the temporary steadiness and prosperity. Among all the novels depicting the dark life then, The Killers is unanimously considered as the best for its superb technic and profound theme. The Killers offers a perfect example of a narrative that challenges and rewards the readers' perception of its structure. The structure of a Hemingway's story can usually be described, conventionally enough, with a set of scenes marked by a change in setting or by a change of characters. What is unconventional and so inscribes his fame as a modernist is that the scenes often are juxtaposed with little transition and less logic to effect or explain their sequence or rationale as a result of his prose style with its syntax linking sentences and simple causes without conjunction and subordination. This is not to say that the structures of the stories lack form or significant pattern, but they are coherent and connected in a sort of dimension which Hemingway said he learnt from c�zanne's paintings. ...read more.

The dimensions of the first two scenes seem to by default direct the readers' attention to the story's factual details: the two killers Al and Max are indistinguishable, dressed like twins or a "vaudeville team"; their sandwich orders are interchanged; they eat with their gloves on; they call George "bright boy" and suggests him going to see a movie; they get the lunchroom prepared for the killing; the n****r cook repeatedly complains and of George gives his careless remarks. However, no matter what image the readers have of the two dimensions, it will reflect the obvious symmetry between them: the action of the first scene is followed by the reaction of the second. And as the story moves on to the third dimension where the theme finally set in, the readers, with a reminiscent view, can figure out that all the details which seem irrelevant to the killing in the previous two dimensions, now, in re-perception, are closely knitted to serve the theme. The incident takes place when three men are in Henry's lunchroom: the cook Sam and the two waiters, George and Nick. Sam, from the very beginning, tries best to keep himself away from this killing: when Nick wants to go to inform Andreson, he advices Nick "to stay out of it", "not to have anything to do with it at all." ...read more.

So horrified Nick is, he decides to leave the town, "I can't stand to think about him waiting in the room and knowing he's going to get it. It 's too damned awful." Thus, at this stage, the readers can see that the theme that Hemingway wants to express is not only to expose the violence and turbulence of society at that time, but in a more profound dimension, to reveal the shock and hurt of all these viciousness and wickedness to the innocent souls like Nick who will bear the image of that doomed boxer into his maturity. Therefore, although the title of the story is The Killers, the hero is actually the young man Nick, whose innocence in the setting of the cruelty of the killers, the cowardice of the cook, the indifference of George and the despair of Ole Andreson, refracts the instability and violence of the society at that disordered time. In The Killers, Hemingway, with his geometric design of the scenes, presents a story of simple plot but profound meaning, debunking the unsteadiness and turbulence of the apparently thriving society. Reading this story is just like viewing c�zanne's landscape paintings: one has large room to perceive and appreciate its beauty and meaning in different dimensions. ?? ?? ?? ?? 1 ...read more.