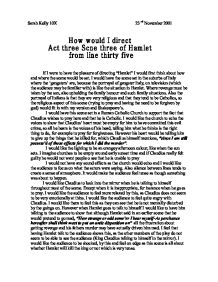 Sarah Kelly 10X 23rd November 2001 If I were to have the pleasure of directing "Hamlet" I would first think about how and where the scene would be set. I would have the scene set in the suburbs of Italy where the 'gangsters' are, because the portrayal of gangster Italy, on television (which the audience may be familiar with) is like the situation in Hamlet. Where revenge must be taken by the son, also upholding the family honour and such family situations. Also the portrayal of Italians is that they are very religious and that they tend to be Catholics, so the religious aspect of this scene (trying to pray and having the need to be forgiven by god) would fit in with my version and Shakespeare's. I would have this scene set in a Roman Catholic Church to support the fact that Claudius wishes to pray here and that he is Catholic. I would like the church to echo the voices to show that Claudius' heart must be empty for him to have committed this evil crime, so all he hears is the voices of his head, telling him what he thinks is the right thing to do, for example to pray for forgiveness. However his heart would be telling him to give up the things that he killed for, which Claudius himself mentions, "since I am still possess'd of those effects for which I did the murder". I would like the lighting to be an orangey afternoon colour, like when the sun sets. ...read more.

These words do not have nearly as much effect as the original line. The original line provides some atmosphere. The word 'curse' suggests evil, as witches were thought in Shakespeare's time to send curses. Also as people were more religious in Shakespeare's time the fact that Claudius has committed the worst sin n the bible they may have been horrified by Claudius' crime. This wouldn't have as much effect on a modern day audience however I feel that the words too tend to portray that Claudius shows disgust towards himself. Some of the words in this scene are quite difficult to interpret so I would have to make some sort of gesture in order to make it more obvious what the two actors mean. I think that obvious hand or body gestures would make it more obvious. For example when Hamlet says, "Up, sword, and know thou a more horrid hent" I think that Hamlet should, lift his sword and then approach Claudius. This would make the true meaning of the sentence clearer. A few lines in this scene make it so enjoyable to watch, but it all depends on the actor's interpretation and delivery of the line. When Claudius says, "O, my offence is rank" This line needs to be emphasised as it shows that Claudius may be feeling regret for what he did. So he could show this by shouting the line, which displays the anger that he may be feeling with himself. ...read more.

I feel that Hamlet would be imagining Claudius being killed and going straight to hell, which would make him very happy. I then think that when Hamlet delivers this last line, "this physic but prolongs thy sickly days". It must be emphasised as Hamlet would be feeling quite sad and angry that he has Claudius in very vulnerable position yet he feels that he cannot kill him, as that would not give him true revenge. I feel that sadness and anger can be portrayed by Hamlet having a pause between physic and but. Also the actor should speak in a low tone to get the audience' attention as this line displays the irony as Claudius is unable to pray. This scene is only effective because the audience knows what happened in the previous scene. They know that Claudius has portrayed his true guilt to Hamlet, confirming Hamlet's beliefs that Claudius killed his father. The way in which he did show his guilt, (When the players put on a play with a murder committed the same way that he killed his brother) would be more effective in Shakespeare's time as then all people who committed murder were believed to go mad, and be affected by the site of their crime. When Claudius views his crime he horrified by himself and feels the need to be forgiven which explains his sudden desperate need to pray. I feel that this scene gives Hamlet its edge of tenseness. The rest of the play is an unwinding tale leaving the audience wondering right until the last scene, will Hamlet kill Claudius? ...read more.