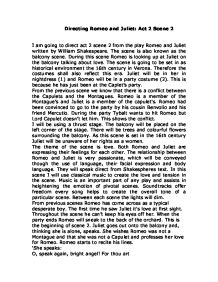 Directing Romeo and Juliet: Act 2 Scene 2 I am going to direct act 2 scene 2 from the play Romeo and Juliet written by William Shakespeare. The scene is also known as the balcony scene. During this scene Romeo is looking up at Juliet on the balcony talking about love. The scene is going to be set in as historical environment the 16th century in Verona. Therefore the costumes shall also reflect this era. Juliet will be in her in nightdress (1) and Romeo will be in a party costume (2). This is because he has just been at the Caplet's party. From the previous scene we know that there is a conflict between the Capulets and the Montagues. Romeo is a member of the Montague's and Juliet is a member of the capulet's. ...read more.

In this scene I will use classical music to create the love and tension in the scene. Music is an important part of any play and assists in heightening the emotion of pivotal scenes. Soundtracks offer freedom every song helps to create the overall tone of a particular scene. Between each scene the lights will dim. From previous scenes Romeo has come across as a typical desperate boy. The first time he saw Juliet it's love at first sight. Throughout the scene he can't keep his eyes off her. When the party ends Romeo will sneak to the back of the orchard. This is the beginning of scene 2. Juliet goes out onto the balcony and, thinking she is alone, speaks. She wishes Romeo was not a Montague and that she was not a Capulet and professes her love for Romeo. ...read more.

The tone used in the speech is very lovey dovey but there is also fear. Juliet's speech at ll. 58-60 reveals both her love and her fear. Juliet's long speech starting at l. 85 makes clear that she is still a virtuous young woman who wishes her love had not been so promptly revealed; but now that it has been, she does not intend to look backward. Throughout this scene I'm going to make sure that their backs are not towards the audience. When the nurse cannot be seen on stage, her shadow will be seen through the window. The scene ends with Juliet planning to meet Romeo again if he agrees to marry her. To conclude the play I will direct Romeo to give Juliet a gentle kiss on the hand. The lights will dim gradually and the music will also fadeout. Punam Patel 2b 10 Di ...read more.