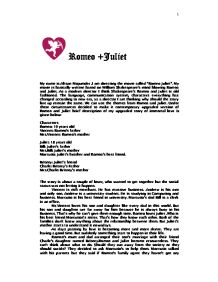 Romeo +Juliet My name is Ahsan Mojumder .I am directing the movie called "Romeo Juliet". My movie is basically written based on William Shakespeare's mind blowing Romeo and Juliet. As a modern director I think Shakespeare's Romeo and Juliet is old fashioned. The language, communication system, characters everything has changed according to new era, as a director I am thinking why should the story line up remain the same. We can use the themes from Romeo and Juliet. Under these circumstances decided to make it contemporary upgraded version of Romeo and Juliet brief description of my upgraded story of immortal love is given below: Characters Romeo: 19 years old Vincent: Romeo's father Mrs.Vincent: Romeo's mother Juliet: 18 years old Bill: Juliet's father Mrs.Bill: Juliet's mother Morcutio: Juliet's brother and Romeo's best friend. Britney: Juliet's friend Charle: Britney's Father Mrs.Charle: Britney's mother The story is about a couple of lover, who wanted to get together but the social status was not letting it happen. Vincent is rich merchant. He has massive business. Andrew is his one and only son. Andrew is a university student. He is studying in Computing and business. Morcutio is his best friend in university. ...read more.

Their parents informed the police. But police says that they can't do anything in this case. Because they are young enough to make their own decisions. They gave the same statement to Police. They got married and lived happily ever after............ From the story I am going to direct the balcony scene where they decided to split up from their families. Each of the character has developed in my story rather than Shakespeare's Romeo and Juliet. Settings: Location: A simple balcony. Shouldn't be luxurious to make a difference between Romeo's home balcony. Than the audience can feel the social difference between two communities. Dress up: contemporary dresses and suits. Background music: Romantic. They both are sitting on chair and facing each other. They are discussing what to do. The script has been attached below- Romeo: "I decide we are going to go far away from here. We will go somewhere else where nobody will try to split us. We will start a new life together. Do you agree with me love?" Juliet: "Whatever you say my Romeo. I gave you my heart, my soul, my mind and now you are asking for my opinion! ...read more.

Think the play was written as a part of his contribution with others to say "no" against such conflicts. The greatest theme in Romeo and Juliet is Love. As I said it's a contemporary version of Romeo and Juliet so I tried my best to keep the vital theme of the play. But in this modern society everything has been changing rather than Shakespeare's era. Such a fact like communication system could change the theme in Romeo and Juliet. I think if Internet would available on that time they might alive until they meet each other. So I have to change the theme slightly as a modern director of Romeo and Juliet. And I also have changed the characters line up in order to give you something different. I haven't involved any violence in my story because nowadays violence is not a rear, so people don't want to see any violence between love and lovers. I mentioned earlier about use of language in Shakespeare's Romeo and Juliet. As you have seen my script, which is written in regular pattern of English, so people can understand it easily and also the people of other countries can enjoy the movie. Ahsan Mojumder English Assignment #4 Name: Ahsan Mojumder Lecturer: Diana May ID: 20000568 1 ...read more.