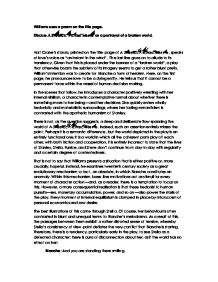 'Discuss A Streetcar Named Desire' as a portrayal of a broken world.

Williams uses a poem on the title page. Discuss A Streetcar Named Desire as a portrayal of a broken world. Hart Crane's stanza, printed on the title-page of A Streetcar Named Desire, speaks of love's voice as "an instant in the wind". The last line goes on to allude to its transiency. Given that this is placed under the banner of a "broken world", a play that otherwise boasts the subtlety of its imagery seems to get a rather blunt prefix. William's intention was to create for Blanche a form of heroism. Here, on the first page, he pronounces love to be a dying entity. He tells us that it cannot be a permanent force within the vessel of human decision making. In the scenes that follow, he introduces a character positively wrestling with her internal nihilism, a character in contemplative turmoil about whether there is something more to her being-and her decisions. She quickly enters wholly hedonistic and materialistic surroundings, where her fading romanticism is contrasted with the apathetic humanism of Stanley. ...read more.

Therefore, there is a tendency, particularly early in the play, to see Stella as a defeated character: there is aura of disconnection about her, as if the world has no effect on her: Blanche: And you are standing there smiling. Stella: What do you want me to do? B: Pull yourself together and face the facts. S: What are they, in your opinion? B: In my opinion? You're married to a madman! S: No! B: Yes, you are, your fix is worse than mine is! Only you're not being sensible about it. I'm going to do something. Get a hold of myself and make myself a new life! S: Yes? B: But you've given in. And that isn't right, you're not old! You can get out. S: (slowly and emphatically) I'm not in anything I want to get out of. Stella's passivity towards Blanche's protestations is a product of this animalistic self-preservation; she is not accepting a nasty, unsolvable problem, but rather endorsing the life she leads. ...read more.

Some might claim that Stanley's realism and forcefulness is shown to be somehow immoral. The fact that Blanche suffocates within the commune is just as much a comment on her as it is on the behaviour of the other characters. The existentialist movement rose alongside science and a more reasoned age, so could it not be argued that Blanche is simply defective amidst a world that is superior to her own hopes? Indeed, she is unable to reconcile her spiritual pretensions internally, let alone make them function within the modern world. Stanley's findings about her past s****l experiences are more than just a victory; they show a flaw which is even greater than naivety. Yes, they show both hypocrisy and a contradiction that extends even to the point of schizophrenia. One can only surmise that the world is broken through Blanche's eyes. However, this is a rather different conclusion to reach. Through her eyes, there is a conflict between what she wants the world to be-the idealistic, indefinable purpose she's searching for-and the reality that everyone else accepts. The world, we see, is broken only to the degree that it is defined as something higher. ...read more.