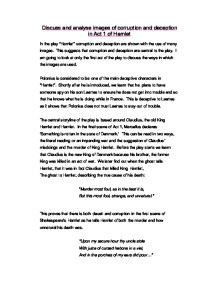 This proves that there is both deceit and corruption in the first scene of Shakespeare's Hamlet as he tells Hamlet of both the murder and how unnatural his death was. "Upon my secure hour thy uncle stole With juice of cursed hebona in a vial, And in the porches of my ears did pour..." This tells of how Claudius poured poison in the ear of King Hamlet while he was sleeping. This is the most prominent act of deception. The marriage of Gertrude and Claudius is seen to be corrupt because it is close in time to the funeral of King Hamlet. It also seems like too short a time for Gertrude to marry after her husbands death. ...read more.

At the end of Act 1, Hamlet begins to act as if he is going insane. This shows that he is not entirely truthful all of the time. This suggests that he is begging to be and could become deceptive as the play continues. He is described to "put an antic disposition on -" This shows how he is deliberately acting mad to deceive people into making them believe he is just going mad until they eventually forget about him. Then he can take his revenge on Claudius for killing his father. From this, I conclude that throughout Act 1 of Hamlet, deception and corruption are used as central themes to the main storyline to progress the storyline and shows the demise of characters. It also emphasizes the tragedy of the play. ?? ?? ?? ?? ...read more.