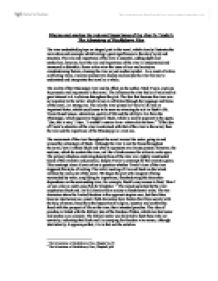 Discuss and analyse the role and importance of the river in Twain&amp;#146;s The Adventures of Huckleberry Finn.

Discuss and analyse the role and importance of the river in Twain's The Adventures of Huckleberry Finn The river undoubtedly plays an integral part in the novel, which clearly illustrates the main ideas and concepts whilst having a great significance to the story's plot and structure. The role and importance of the river is essential, adding depth and symbolism, however, how the role and importance of the river is interpretated and measured is debatable. Some critics view the issue of race and society as overshadowing factors, classing the river as just another symbol. As a result of critics conflicting views, it seems necessary to discuss and analyse the river for one to understand and interpretate the novel as a whole. The reality of the Mississippi river and its effect on the author, Mark Twain, explains its presence and importance in the novel. The influence the river had on Twain and his great interest in it is obvious throughout the plot. The idea that because the river was so important to the writer, which in turn is infiltrated through the language and focus of the novel, is a strong one. The role the river played in Twain's life was an important factor, which could come to be seen as mirroring its role in Huck's life. ...read more.

This theme is reoccurring throughout Twain's novel suggesting that the uncivilised way of life is superior; drawing on the idea's of Jean- Jacques Rousseau and his belief that civilisation corrupts rather than improves human beings.7 The civilised aspects of the novel are predominantly negative, especially concerning the social commentary of the people and places along the Mississippi in the south. Therefore, the emphasis placed on the contrasting river and shore scenes suggest that to find American democratic ideals, one should return to nature. To reiterate this view, Twain uses precise descriptions of Huck's literal moving away from the shore, suggesting he's moving beyond the stagnant and often unprincipled laws of organisation, as suggested in the following quote, 'I tramped off in a hurry for the crick..red-hot to jump aboard and get out of that awful country.'8 Mark Twain's cleverly uses the river as a crucial symbol of freedom to emphasise the necessity of nature within the novel and society in general. It provides Huck and Jim with an escape from civilization and the increasing restrictions of society. The usage of this symbol has an enormous significance to the story's plot and structure. As the twosome begin their travels down the river, it moves freely, gracefully and smoothly, whilst remaining it face-pace, igniting the essential sense of suspense. ...read more.