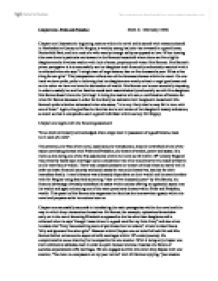 Discuss Chapter One of Pride and Prejudice

Chapter One- Pride and Prejudice Malik Al-Mahrouky 12JRb Chapter one illustrates the beginning notions within the novel and is started with rumours abound in Hertfordshire County to Mr Bingley, a wealthy young bachelor has invested in a grand home, Netherfield Park, and is in need of a wife merely through utility as opposed to love. When hearing this news there is particular excitement in the Bennett household where there are five eligible daughters and a frivolous mother with lack of sense, propriety and virtue: Mrs Bennett. Mrs Bennet's prime prerogative it is to successfully see her daughters both financially and suitably matched which is reflected when she says "A single man of large fortune; four or five thousand a year. What a fine thing for our girls." This juxtaposition reflects two of the foremost themes within the novel. On one hand we have pride, pride in believing that her daughters are worthy of such a regal gentleman and on the other we have we have the declaration of wealth. ...read more.

It is ironic as this being one of the first statements within the novel as life within 18th century England was primarily based upon marriage: social competition into who would marry who based primarily on the mere fact of wealth. There was constant pressure on women of those times to marry well in order to obtain financial security and social status for not only themselves, but also for their immediate family. A man's fortune was ultimately dependent on their wealth and income therefore with Mr Bingley being described as earning " four or five thousand a year" by Mrs Bennet, his financial advantage obviously subsidises his status within society offering an egotistical aspect into his wealth and again enhancing one of the more prominent themes within Pride and Prejudice, wealth. This quote by Mrs Bennet also augments the fact that she is somewhat a gossip within the novel and prepares us for her actions later on. ...read more.